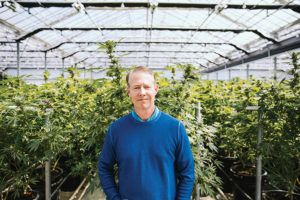 While other industries with illicit-market issues can call on law enforcement to punish perpetrators by closing them down, fining them and even jailing them, that doesn’t work quite so well in cannabis.

Why? Advocates of marijuana legalization campaigned partly on the promise that state-legal cannabis markets would create opportunities for those groups harmed by the war on drugs, and locking up people for conducting business others are doing with the state’s blessing would be frowned upon by those inside and outside the legal industry.

“Punitive measures that can be taken that don’t involve jail: fines or similar punishments. Just like slumlords are fined for violations, landlords who allow illicit operators should also be fined,” said Kyle Kazan, CEO of Glass House Group in Long Beach, California, and retired officer from the Torrance, California, police department who is active in the Law Enforcement Action Partnership, an anti-prohibition and harm-reduction group based in Medford, Massachusetts.

“I want to see fewer people go to jail for marijuana. … So I would be going after any landlord with massive daily fines. The landlord will be the agent for the government to get rid of them, and it won’t cost the government that much money. If the landlord is asleep at the wheel, there are civil penalties.”

More traditional enforcement can also have a role in reducing the illicit market. Steve Lopez, CEO of The Green Solution, a vertically integrated company in Colorado, said hundreds of illegal indoor grows have been closed in the state over the past year or so, diminishing illegal supply and driving customers to legal outlets.

“They hit that market pretty hard to the point where we have people coming into our dispensary and telling us that they hadn’t been in the dispensary in a couple of years because they had been buying illegally, but now, because that market’s drying up, they felt like they were forced back into the dispensaries,” Lopez said.

“Colorado has actually done a much better job than some states like Washington and Oregon, where you had a price per pound under $100 because there was just so much supply,” he said. “Colorado did a good job of regulating the legal supply, and then they’ve also been doing a good job also closing down a lot of these illegal grows (and) limiting the product that’s out there.”

And once consumers try the legal market, Lopez added, they are often positively surprised by the variety of products, giving licensed stores a chance to convert them for good.

“Once people start realizing the cost difference for what you get, what the value of it is, we’ve been able to hold on to them,” Lopez said. “We’re addressing those price points with a much-higher-quality product. So people come back, a lot of them start joining our loyalty program, and then they just change their habits from the guy down the block.”

As regulators get smarter about employing alternative-enforcement measures, along with revising regulations in a way that makes operating a legal cannabis business less expensive, the illicit market will diminish if not entirely disappear, Kazan said.

“I’ll be stunned if we’re having this conversation in five years,” he said.

NEXT: Will Federal Legalization Smoke Out the Illicit Market?

How to steer your cannabis business through a recession
16 ways to cut cannabis costs, increase profit during a recession
Lessons from Recessions Past
MJBizCon2021