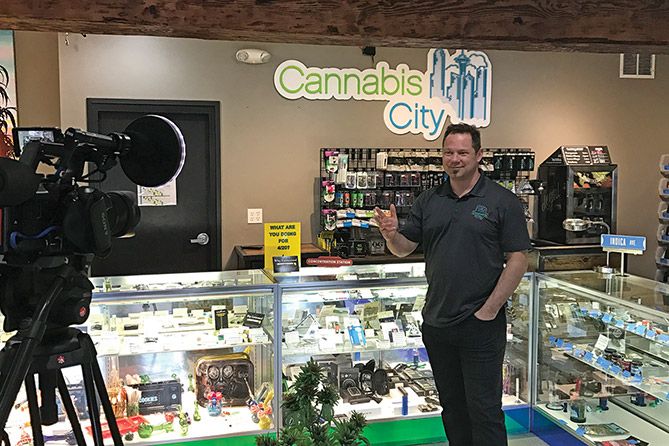 Branding a cannabis business that specializes in a stop along the supply chain—cultivation, product manufacturing or retailing, for example—is a different challenge than branding a vertically integrated marijuana company.

For one thing, many specialist businesses are small and might not have the marketing budgets and supports that larger, vertically integrated companies do. One-off mom-and-pop retailers don’t have the same presence or supply-chain connections as multiple MedMen stores in California or Trulieve stores in Florida. Non-vertically integrated product manufacturers and growers, meanwhile, must persuade retailers to give them shelf space, which is costly in terms of money and time.

Despite these differences, branding and marketing strategies are essentially the same for businesses of any size: Develop your company’s identity and mission, then find creative but cost-efficient means for consumers to discover your brand.

Birth of a Brand Name

Cannabis City is the first and oldest marijuana retailer in Seattle, having opened its doors July 8, 2014. That it’s humming along almost six years later might suggest a good branding strategy. But don’t be fooled, warns store founder and CEO James Lathrop.

“It’s actually not a very good name as far as branding goes,” he said. “The branding rules say you need to have a name that is unrelated to your product, that’s catchy, that you can make a brand out of it.” He offered Apple and Orbitz as examples. “Cannabis City is actually a horrible brand name.”

When the business first started, however, branding a recreational cannabis store was uncharted territory, and Lathrop worried a name that wasn’t straightforward might confuse potential shoppers—or the average passerby might not realize it was a marijuana store.

He also asked friends in the design and marketing worlds, and they approved of the name enthusiastically. “The reaction at that time was, that’s an awesome name, and you’ve got to get the website,” Lathrop recalled. The domain name for cannabiscity.com was already taken, but Lathrop did buy cannabiscity sites ending in other domains such as .us, .co and so on.

Nowadays, Lathrop said, “A cannabis store is better off with something unique and funny or interesting that has nothing to do with cannabis.” He added: “I wouldn’t necessarily choose Cannabis City today, but because of the Cannabis City brand and our history (as the first store in Seattle) with it, it made sense at the time for a new market.”

To market Cannabis City, Lathrop developed two cartoon characters, Buddy and Cat. Buddy was a female marijuana bud, while Cat, modeled after Shaggy from the “Scooby-Doo” franchise, was her boyfriend.

“I was going to use these guys as mascots for Cannabis City, and I was going to have them run around Seattle and do funny things,” Lathrop said. But the state Liquor Control Board killed the idea, saying it might appeal to children.

Lathrop also had trouble with his logo, which initially featured Seattle’s famous skyline and Space Needle. But about a week after Cannabis City opened and the image had been seen on news outlets across the country, Lathrop received a cease-and-desist letter from lawyers for the company that owned the Space Needle, saying they had copyrighted the structure’s image, and he couldn’t use it. Lathrop considered hiring a lawyer, but in the end he declined.

“I didn’t want to go to war with their New York legal team.” Instead, he changed the Space Needle and skyline image enough to get the lawyers to “begrudgingly” back off.

Despite being able to use a variation of the Space Needle in its logo and being the first recreational retailer in Seattle, Cannabis City initially struggled because the area’s illicit market was still thriving and advertising and signage options were limited. When Cannabis City opened, state regulations prohibited recreational stores from having more than two signs that couldn’t be more than 800 square inches. Worst of all, Lathrop’s 600-square-foot store was in southern Seattle’s industrial district, an out-of-the-way part of town with modest consumer traffic at best.

Hoping to increase business, Lathrop in 2017 decided on a rebrand that included a new rooftop billboard to attract more far-away eyeballs and a redesign of the store’s interior and exterior, the highlight of which was dichroic tiles on the façade that would change color from bright yellow and green to a deep purple when pedestrians or vehicles passed by.

“Because the signage was limited, one of the things that I did and many other pot shops did was try to draw attention to the buildings by some kind of art form,” Lathrop explained. Other shops, he noted, had murals on their walls. Lathrop estimated he spent north of $250,000 on various advertising and design efforts.

Lathrop said the investment paid off. Although Cannabis City’s revenue has been static or in decline as the cannabis market matured in the past three or four years, the store would have done worse—possibly even going out of business—had he not invested in the changes, Lathrop said.

“If I hadn’t done these things, I probably would have lost more revenue. I just slowed the descent enough to still be here,” he said.

Lathrop plans to close his current store and move about two blocks into a 4,000-square-foot location that also will have a cannabis cultural center and museum. “That’s a bit of a scary prospect to spend $250,000 or more and then move it two blocks.”

But Lathrop believes the gamble will pay off because he will have almost seven times the amount of space to work with, and the store and cultural center will be visible to tens of thousands of passengers on a light-rail system that passes by the new location.

“This is the idea I’ve had from the beginning: I wanted to have a full cannabis experience but didn’t have the area for it,” Lathrop said. Construction started early this year, and Lathrop hopes the new location will be open by June.