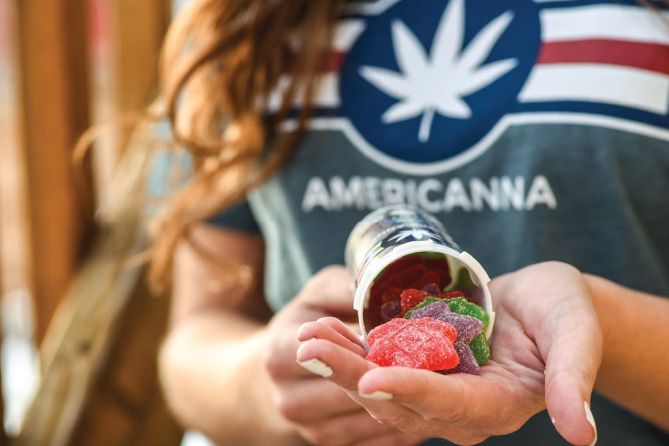 Americanna scored a coup in 2016: Its Sour Leaf Gummies were among the top-selling recreational edibles in Colorado.

Moreover, Boulder-based Americanna accomplished that feat in just eight months. The company unveiled its cannabis leaf-shaped gummy in the spring of 2016. By the second half of the year it had climbed to the No. 1 spot and finished the entire year at No. 2 by volume and revenue, according to the data company BDS Analytics.

Americanna took a number of steps to differentiate its product line from rivals.

It developed a recognizable shape for its edibles, focused on sour-style flavors that are popular among candy consumers and opted for distilled oil to infuse its edibles with pure THC.

“As we began to play around with this, I noticed, through our own personal R&D of consuming the product, that the efficacy of the experience of eating this got so much better,” Americanna CEO and founder Dan Anglin said. “Your body is processing the pure THC instead of all of the compounds of the cannabis plant.”

Americanna also priced the gummies to be cheaper than those of its rivals: They retail for about $17 for 100 milligrams of THC (10 servings) versus the roughly $25 charged by most competitors, according to Anglin.

To create the new gummy, Anglin opted for distilled oil rather the decarboxylated hash oil commonly used to infuse edibles.

Anglin, who used to work for a large edibles company, discovered that decarboxylated and winterized cannabis oil can darken the color of candy. The distilled oil, by contrast, allows Americanna to maintain the color of its pastel-colored Canna-Puffs, a separate product from the Sour Leaf Gummies.

In addition, the pure THC is intended to help ensure each edible delivers the same effect for consumers.

To source its oil, Americanna built a fractional distillation lab and focused on refining its product formulas. The process of perfecting the oil took about three to four months and cost $50,000 to test in a licensed cannabis lab. But the time and expense allowed the company to craft the oil that best suits its needs – and that fits into Americanna’s overarching strategy to improve the quality of its edibles.

“We tried other companies’ oils,” Anglin said. “They didn’t taste good enough for our candy.”

The decision to move forward with distilled oil came with a higher price tag, however. It drove up the costs of the oil by 10% because of higher costs for supplies, equipment maintenance and the labor associated with the extra time of distilling. Still, Anglin said he recognized a need to market more consistent products in the recreational marijuana marketplace.

“We like to focus on consistency,” he said, “because that’s what is really important as more and more people start to consume cannabis.”

Anglin is also quick to point out that Americanna was among the first cannabis gummy makers in Colorado to go down the distilled oil route, which he said is now the gold standard for quality edibles.

In addition to distilled oil, Americanna uses pharmaceutical-grade metered dosing lab equipment to dial in its dosing. This helps ensure accuracy and precision for each serving of THC, Anglin said.

The company said it can dose its edibles down to the millionth of a milligram, or a microliter. Every time a consumer buys an Americanna gummy and cuts it in half, for example, he or she will have the same experience – whether it’s the time required to feel the effects of the gummy, or the duration of the high, said Anglin, noting there are exactly 5 milligrams of THC in every half a gummy.

Going for the Leaf

To distinguish its gummies from rivals, Americanna dreamed up a widely recognizable shape: a cannabis leaf formed using a $15,000 custom-made starch mold.

Starch molds are traditionally used by confectioners, Anglin said. Unlike silicone or injection molds, which can create a cleaner cut, starch molds create softer edges for the gummies, which make for a better experience for consumers.

Anglin also had regulatory considerations in mind: The leafy shape, Anglin’s brainchild and design, identifies the edibles as cannabis products, not something to be consumed by a child. In addition, the gummies carry the state-mandated THC logo.

“It would make it really clear to everyone that this is a cannabis product,” Anglin said, “and we could capitalize on the novelty of a pot leaf-shaped candy.”

When he bought Boulder Pharma, the extraction firm that he ultimately turned into Americanna, Anglin knew from the get-go he did not want to infuse commercially available candy, like gummy bears and Sour Patch Kids, as some edibles manufacturers have done. Those products face concerns about accidental consumption and could trigger a response from regulators, he said. Separately, the design created an opportunity for cannabis consumers to legally purchase cannabis products shaped like a pot leaf.

“What we should do to stop this conversation is have proprietary shapes,” said Anglin, a former marijuana lobbyist who has worked on regulatory issues for cannabis makers in Colorado. “These things were not things you could buy outside of a dispensary.”

Anglin’s previous experience in the edibles business told him that cannabis consumers respond to flavors that are also popular among candy consumers.

So Americanna focused on “specific flavors that we know are performers in the confectionary market: watermelon, strawberry, grape and sour apple.” The latter was the most popular flavor of Americanna’s gummies in 2016, he said.

The company also discovered that people like sour cannabis gummies more than sweet gummies, based on sales figures for Americanna’s sour gummies in 2016. In fact, the company’s sour products generated 38% of the company’s overall sales last year.

Still, consumers don’t like products to be overly sour. That’s why Americanna uses a sour sanding, rather than a sour gelatin flavor. The sour sanding method allows Americanna to control the amount of sour flavor because it’s only on the surface of the gummy and not in the gelatin, according to Anglin. “It wasn’t so overpowering,” he noted. “It’s not Warheads sour.”

More broadly, Americanna’s flavor strategy relies heavily on data. It gathered research from the National Confectioners Association to inform its decision-making and then used those insights to guide the development process for three new flavors that launched July 4: Sour Sativa Gummy Freedom Mix, which is strawberry, white lemonade and blue raspberry; a sweet mix of peach and banana; and a sweet-and-sour mix that utilizes all five of the new flavors.

“At the end of the day, even though it’s been adulterated with cannabis, it still has to be candy that people want to eat,” Anglin said.