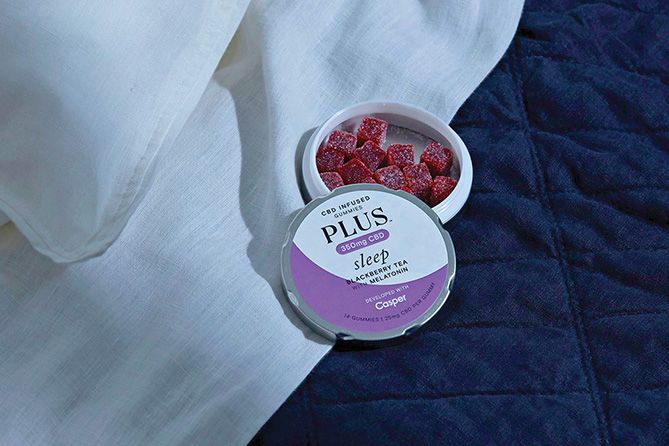 What do a CBD company and a mattress maker have in common? Sleep, of course.

That’s why San Mateo, California-based Plus Products has teamed with Casper Sleep in New York to offer a melatonin- and CBD-infused sleep product.

Introduced in September, the sleep goods are the first 100% hemp-derived CBD brand for Plus, which also produces THC-infused edibles.

“There are indications that CBD can help with sleep,” said Plus Products co-founder and CEO Jake Heimark. “Casper is in a strong position to communicate that.”

Casper has reached a $1 billion valuation through mattress sales and now is delving more into sleep health, offering products such as bedding, a nap pillow and the Glow Light, which helps cue the body that it’s bedtime.

Before partnering with Plus, Casper was receiving numerous requests a day from CBD companies interested in forming partnerships, Heimark said.

About a year ago, Heimark started talking with Neil Parikh and Luke Sherwin, Casper’s co-founders and Heimark’s college pals, about creating a sleep product together. “Many branded-product companies want to work with other great brands,” Heimark said. “We knew right away what we wanted to do, but we had to create a product.”

Developing the products took about six months. Plus conducted product and flavor testing and provided Casper with a few samples to select from for the final product. Then Plus Products and Casper had to hammer out the details of the agreement, which took another six months. “Everything we do is harder because of the industry,” Heimark said of the cannabis space and all the legal and regulatory issues surrounding the sector. “When you’re a company that isn’t in the industry, they have to get familiar with all that stuff.”

The new CBD line has three distinct products developed by Plus’ team of scientists and chefs:

Consumers who visited the Casper website and wanted to purchase the products could click on a link that took them to the Plus site, where they were able to buy a tin of 14 gummies with 24 milligrams of CBD for $35. In return, Casper received a percentage of Plus Products’ sales.

“Everything has to be complicated in cannabis,” Heimark said. “We’re not allowed to sell on their website, but we can have photos.”

When the partnership was announced, Legend said, “I was drawn to the Plus team because they’re an innovative, family-run company, and they use science to deliver a consistent, high-quality product. I appreciate that they’re committed to setting a high standard within an industry that has to date been fairly unregulated.”

Overcoming the stigma of being a cannabis company is the biggest obstacle Plus Products faced when hammering out details of the agreement. Heimark said that Casper had a lot of legal questions that took time to address. Casper’s questions revolved around the Farm Bill, state laws governing the sale of CBD and the manufacturing process. The company also focused on Plus’ high standards in manufacturing, which include a 14-point testing system.

“They understand that partnering with any CBD company could be a danger to their brand,” Heimark said. “We had to create a really good product together.”

Studies have suggested that CBD may help with insomnia and other sleep problems, but because it is not approved by the U.S. Food and Drug Administration for that use, it cannot be marketed as a sleep aid.

“CBD is a confusing marketplace,” Heimark said. “We believe that when people try our (product), they come back. Marketing partnerships get you your first sale. Every single subsequent sale is based on the quality of your product.”

Plus recently kicked off a nationwide marketing campaign featuring the hemp-derived CBD sleep products with the launch of its first direct-to-consumer digital commercial.

Plus is still tallying initial figures, but sales were brisk. The company generated more than 300 million impressions from its launch event, including coverage from Forbes, CNBC, Politico, The Hollywood Reporter and Billboard.

Plus agreed to sell a set number of products until the inventory ran out, which occurred shortly after sales began.

As a result of the successful collaboration, the company is looking at doing something larger with Casper in the future.

“It’s going much better than we had thought it would,” Heimark said soon after the launch. “We predicted a certain number of units. It’s selling out. We’re putting together a plan to make the product and ship it together. There are a lot of moving parts behind the scenes.”