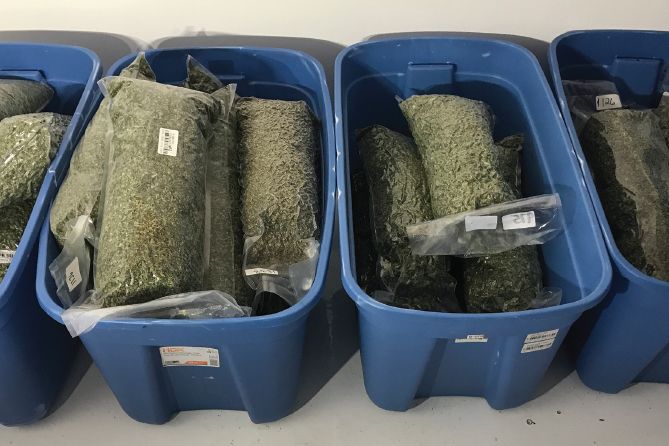 A poorly stored marijuana crop can destroy your profits before your cannabis ever reaches the market.

“You can take four months to grow it and ruin it in four hours if you’re not careful,” said Greg Stefanik, regional production manager for Shango Premium Cannabis, based in Portland, Oregon.

Improperly stored cannabis can go bad in a number of ways: It can turn brown, break down or lose its flavor, smell or possibly even potency.

So careful crop storage is crucial. Moreover, storage is likely to become even more important as new cannabis markets come online and the number of cultivators grows. An increase in supply could trigger a glut and a drop in prices, spurring growers to hold on to their crop until the market rebounds.

When storing cured cannabis, cultivators must carefully control variables such as temperature and humidity while arranging the plant in a way that protects its structural integrity.

In that sense, the storage of cut and dried flower requires as much attention to detail as any other step in the cultivation process.

Properly stored cannabis that is cured correctly, stowed at the right temperature and hidden away from light can last months, even more than a year. By contrast, marijuana that is stored wet or is exposed to light and allowed to get hot can turn on you in a matter of weeks.

One traditional method is to store your crop in a cellar. Another is to put the crop in pickle barrels and bury it in the ground. Depending on the climate where your grow is located, the earth will keep the product at a constant temperature.

Casey O’Neill, a marijuana grower with HappyDay Farms in California’s Mendocino County, places his cannabis in clean, food-grade turkey bags before storing it in a pickle barrel in the ground.

Temperature variations – particularly heat – moisture and light are your enemies.

“The main things are cool and dark and dry,” O’Neill said.

O’Neill tries to keep his marijuana stored in the 50-60-degree temperature range. You definitely don’t want it to get above 70 degrees, he said, or it will turn brown and degrade.

Stefanik with Shango stores his cannabis in a standard commercial freezer and seals it with desiccant packs that help control the moisture levels. He keeps the freezer at about 25 degrees below zero.

“One of the things you have to watch out for when you’re freezing is frost,” he said. Frost will ruin the quality of the bud when it’s thawed.

He also cautioned that the plant becomes fragile when frozen. “You just give it a little flick with your finger and it just blows apart,” Stefanik noted.

Frozen cannabis flower also can’t be stacked without any space in between. “You don’t want to stack 50 pounds on top of itself,” Stefanik said. “You’re going to end up ruining a lot of product.”

To avoid this, Shango uses standard baker racks with one layer of flower on each rack.

Leo DeMarco, who grows cannabis for Green Growers Technology Alliance, a network of cultivators in Michigan, typically stores his cannabis in thick plastic bins that keep out light to avoid degradation of the plants’ trichomes.

His employees will regularly open, or burp, the containers to freshen the oxygen for about a month before the buds have reached a desirable moisture content and the containers can be set aside and the burping stopped. DeMarco also stores his cannabis in a cool, dry room that’s around 70 degrees and 40% humidity.

It’s common practice in the industry to seal cannabis in nitrogen-filled bags, but O’Neill finds that the plant degrades too quickly if it has been sealed that way. Stefanik said Shango is testing storing cannabis with nitrogen to see if it will work for his company.

At Shango, the team meets to discuss what action to take if market demand drops and the company needs to hold on to product until prices recover.

“I could see that being a problem for companies out there real quick,” Stefanik said.

In the event Shango needs to store a surplus, Stefanik said he would rent a commercial freezer the size of a shipping container. It wouldn’t be the most cost-effective move – it could cost up to several thousand dollars a month – but it beats dumping loads of product.

“We have a pretty stable marketplace for our products at this point, so we get the same price year-round,” he said. “We’re a small operation and we’ve always liked to have product for patients throughout the year.”

To cut down on a pricey capital outlay and large amount of work at harvest, O’Neill spaces out his trimming schedule. That way he doesn’t have to hire an army of trimmers all at once and can even out his production timeline.

“It’s more beneficial to be able to stretch it out over the course of the year and not end up in a desperation space where you have to sell it because you need the money,” he said.

DeMarco said his Michigan-based company so far has not needed to hold on to its product for longer than six months. He said the demand in the market in the upper Midwest is high enough that storage has not been a major issue.

The Importance of Curing

In addition to where your crop is stored, cultivators stressed the importance of properly curing the cannabis before placing it in storage.

You’re fighting a losing battle if the plant isn’t correctly cut and dried.

“If it’s not cured properly and you store it, it’s going to amplify whatever is wrong with it when you open it up a couple of months later,” Stefanik said. The buds will have degraded much more quickly and lose their potency.

When Shango harvests its crop, workers analyze the buds under a microscope to ensure the trichomes developed correctly. Stefanik wants the majority of the trichomes to appear cloudy or amber in color.

“That’s when the plant is telling you it’s ready to go,” Stefanik said.

Then he hangs the plants for 14-25 days with the temperature in the low 60s and the relative humidity at 60%, with a slight breeze created by fans.

His preferred method is to store the product untrimmed, but pared down to eliminate large stems.

Like Stefanik, O’Neill cures at 60 degrees and 60% humidity, taking four to 12 days to cure, depending on the size and density of the flower.

O’Neill’s determining factor is how the stem of the plant snaps – he’s looking for a bend, then a snap. If the stem merely bends, it’s too wet. If it snaps too easily, the plant is overly dry.

DeMarco said he likes to start out at 65% humidity and slowly decrease it over 11 days to 50%-55%. His general rule of thumb for finishing the cure is when the fan leaves become brittle. Then the product is trimmed before it goes to the containers.

If the product is properly cured and stored, it can last about 10 months and be phenomenal, according to O’Neill. He’s seen cannabis that’s not stored well turn brown in a matter of months.

“Storage has a huge part to do with it,” he added.

“THC doesn’t really break down,” he said. “The plant itself, yes. But if it’s stored properly, you can have a product there for years that doesn’t really lose its potency.”