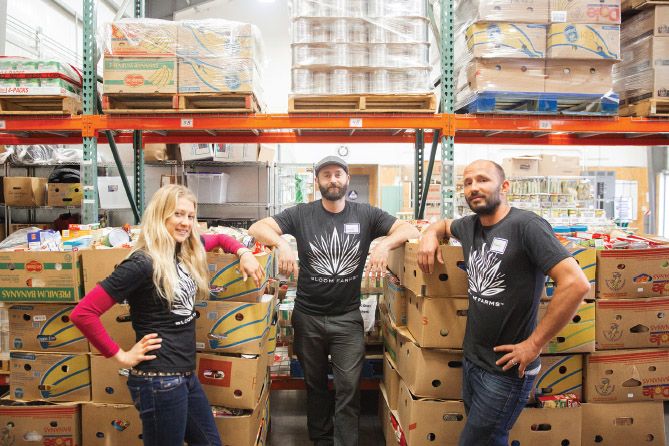 Michael Ray is convinced it makes good business sense to give back to society.

“Corporate social responsibility is an essential part of capitalism moving forward,” said Ray, the executive director of Bloom Farms, a California not-for-profit company that makes CO2-extracted cannabis oils and vape pens. Bloom Farms is a leader in this area, having donated more than a quarter of a million meals to state food banks.

Bloom Farms’ corporate social responsibility program is grounded in the fact that many people lack access to the food they need to live active, healthy lifestyles.

Despite California’s world-class economy, one in eight residents are “food insecure,” according to the California Association of Food Banks. And more than 2.1 million children in the state may go to bed hungry each night.

Those numbers startle Ray, who grew up in a poor community in the foothills of the Sierra Nevada mountains in Calaveras County, California.

“Food insecurity was a problem in my community,” Ray said. “That’s why I’m so passionate about it now.”

Ray uses his cannabis company to give back. For every product sold, Bloom Farms donates one meal to a California food bank.

“Operating as a not-for-profit medical cannabis collective allows us the flexibility to create corporate social responsibility as a major piece of our brand,” Ray said.

The 1-for-1 program has had a positive impact on the collective’s connection to its community, Ray said.

Corporate giving, however, requires careful planning and keeping things simple, according to Ray. You should balance the downside versus the upside of giving back. Giving back isn’t cheap. And if you’re thinking of giving to a particular charity, evaluate it beforehand. Also, focus on a single cause rather than spreading your donations widely.

Weigh the Risks vs. Rewards

Ray weighs the risks versus rewards of every business decision. The rewards of corporate giving are clear, he said.

“It feels like the right thing to do,” Ray said.

It also can help your business. For example, Bloom Farms has had single-digit turnover the last two years, something Ray attributes to a strong company culture that prioritizes giving back. Turnover is extremely expensive when you consider the resources expended on onboarding and training new hires. Less turnover has saved Bloom Farms money.

A common refrain among entrepreneurs is it’s tough to run a business. If, on top of that, you want to invest in a corporate giving campaign, it has to make sense for your company. You have to run a very tight ship, he said.

“You have to be very efficient, deliver a quality product and connect with your consumer to be in a position to donate large amounts of money to a charitable organization,” he said.

Consult with your CFO to determine whether an ongoing corporate giving campaign is sustainable. If it isn’t, sponsorships are opportunities to give back.

“Any sort of giving – whether it’s time or financial – is worthwhile,” Ray said. “Organizations should try to give what they can while still remaining financially balanced. It’s not about what you get out of it as much as ‘does (it) feel right?’”

Work with a consultant or use an online tool to vet the recipients of your donations.

Bloom Farms donates to and volunteers with reputable food banks: the San Francisco-Marin Food Bank, the World Harvest Food Bank in Los Angeles, the Sacramento Food Bank & Family Services and the Alameda County Community Food Bank in Oakland. Keith Hart, president of the Sacramento-based KJH Consulting, vetted all of them.

“Charitable organizations can be quite controversial,” Ray said. “For whatever reason large food banks don’t seem to be.”

Some large organizations accept sizable donations from polarizing figures – the Koch brothers, for example. Others have been dinged for lavish spending on travel, food and lodging for top executives.

Smaller community-oriented charities are often easier to vet, Ray said. You can meet the people who receive services and build relationships with the administrative staff. Ray’s consultant has helped build those bridges.

“I recommend to anyone interested in doing this that they work with someone who knows what they’re doing,” he said.

Also, don’t donate to an organization that mismanages funds or misrepresents its services, and be cautious of an organization’s political affiliations. If you’d like to research organizations yourself, GuideStar, ProPublica’s Nonprofit Explorer and Charity Navigator are free online databases that allow you to vet nonprofits before you donate.

The 1-for-1 program – the approach Bloom Farms uses for its meal donations – is an “easy way to wrap your head around what we do,” Ray said.

In the case of Bloom Farms, the company tracks its product sales and at the end of every month donates meals on a 1-for-1 basis to a food bank.

By contrast, avoid complicated formulas that can confuse consumers – i.e., percentages of sales or profits. The numbers might complicate the message.

The 1-for-1 program makes it easy for Bloom Farms’ brand ambassadors and budtenders to explain how the business gives back. They can respond with confidence to consumer queries.

Also, review all communications about your corporate giving campaigns with your nonprofit partners. You want to be sure that the partnership is appropriately represented. In other words, you want to demonstrate that you’re doing what you say you do and that you’re not reflecting poorly on your nonprofit partner. And make yourself available to answer your employees’ questions about how you give. You don’t want to mislead consumers.

“Don’t promise something you can’t do,” Ray said.

Paid time to volunteer encourages employees to connect with their communities. It can also reduce turnover and prompt your employees to share positive news about your philanthropic efforts.

“Talented people can get a paycheck at any job,” Ray said. “Our team cares about more than a paycheck. They care about where they’re investing their time.”

Bloom Farms offers employees four hours of paid time to volunteer each month. The team chooses a day to volunteer at a food bank and volunteers together. Ray recommends that approach: It’s easier to track participation and pay employees for giving back. Again, keep it simple, Ray said. Any employee who attends is paid and no one clocks out to volunteer.

Choose a Single Cause or Nonprofit to Support

“Stay laser-focused on a cause,” Ray said. It’s food insecurity for Bloom Farms, but there are countless worthy organizations.

When you become known for giving back, you’re going to get a lot of requests for donations.

“There are all sorts of amazing causes that need to be taken up, but we focus on our cause,” he said. “We’ve really taken the approach to do one or two things right, rather than many things halfway.”