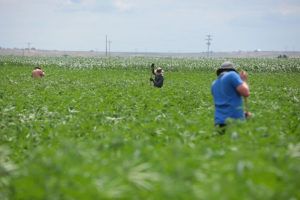 For an idea of how federal prohibition skews a labor market, look no further than the boom-boom hemp industry. The end of prohibition caused seismic shifts to a labor landscape with aftershocks that continue to unsettle the industry more than a year later—and offer new job opportunities for folks who had never considered careers in cannabis.

The hemp labor market blew up as soon as the 2018 Farm Bill made the crop legal. Seemingly overnight, conventional farmers and large landowners were scrambling to find employees with expertise in the niche crop.

At the same time, longtime marijuana entrepreneurs looked to join the hemp industry and capitalize on legalization’s many benefits, which include lower taxes as well as access to crop insurance and government hiring incentives.

“It was immediate, people wanting to find employees in hemp,” said James Yagielo, CEO of HempStaff, a Florida recruiting firm that places talent across the cannabis industry.

The scramble for hemp expertise had immediate effects on average salaries in the hemp sector. Experienced hemp cultivators started commanding six figures, and hiring picked up in places that previously had few legal cannabis employers, such as North Carolina.

So when hemp entrepreneurs hoped to take immediate advantage of legalization by launching broadacre hemp cultivation in 2019, Yagielo saw an incredibly tight market for farm managers with experience overseeing large outdoor farms of any crop.

“You don’t have as many people on the (marijuana) side with experience running a large outdoor farm, so those folks were in extremely high demand,” Yagielo said. His company saw placements of:

Salaries were driven even higher because the overall job market for experienced managers is so tight.

“In our area, we’re competing with some big tech companies like Panasonic and Tesla, so it’s really hard to find good people,” said Adrienne Snow, co-founder of Western States Hemp in Reno, Nevada.

Less-skilled employees were hard to find, too, in the months after hemp legalization. Yagielo even started seeing employers offer something he’d never seen on the marijuana side: free housing.

Yagielo’s clients sometimes offer rooms on or near a farm as an incentive to draw folks to rural areas with little housing available to rent.

“A lot of these hemp farms are in very remote areas,” Yagielo explained. “So there’s not a lot of places to find housing. A lot of these places, they have farmhouses or cottages on the land, and they are renting them out or just making it part of their salary that their employees can live there for as long as they wish while they’re employed.”

If it seems that hemp legalization has done nothing but drive up salaries in the sector, it has also introduced volatility that can have employers and job seekers alike wishing for the relative stability of the illicit marijuana market.

Hemp’s expansion in 2019 led to a huge influx of CBD and other hemp products into the market by the end of 2019. The results were predictable: falling prices, followed by tighter margins and layoffs across the sector.

Longtime hemp entrepreneurs such as Michael Bowman, co-founder of First Crop hemp consultancy in Colorado, say the market fluctuations caused by limited legalization in 2014 and then full legalization in 2018 have been significant.

“We went from zero (acres) when we started this in 2014 to something like 500,000 permitted acres last year,” Bowman said. “So that’s putting a lot of pressure on a lot of points in the supply chain.”

He predicted “downward pressure” on hemp wages as the sector matures in 2020 and beyond. But he said salaries will stay high at hemp businesses that can handle industry turbulence.

“Nothing beats a good, loyal employee,” Bowman said. “I think the good, legitimate operators who were able to survive 2019, their employees are going to be taken care of. (Those companies) understand that their future is not only them, but it’s having good employees.”

Next: Best of Both Worlds

Get Our Daily Email
Get Our Newsletter »
Subscribe to the Magazine »