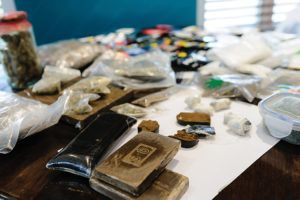 The illicit marijuana market is among the biggest and most complex challenges facing legal cannabis businesses—one that takes revenue from licensed companies and hampers the growth of state-legal MJ programs nationwide.

Cannabis industry advocates continue to argue that legalization would eliminate the illicit market because consumers would prefer to buy marijuana legally instead of from underground suppliers. But that theory hasn’t panned out—even in states with legal marijuana—thus dealing a blow to one of the primary arguments for legalization: that it would knock out the illicit market.

Rather, the illicit market continues to thrive—or at least survive—in most states that have legalized recreational cannabis. In California, the nation’s largest legal adult-use market, roughly 80% of cannabis sales are underground, according to Washington DC-based analytics company New Frontier Data. The illicit market is even stronger in medical-only states, and it’s the only way to procure marijuana in states with no legal markets at all.

The price of admission

Why does the illicit market continue to thrive in recreational states at the expense of legal marijuana businesses?

The overwhelming reason is cost of product. Legal marijuana businesses must pay thousands of dollars for licenses—not to mention taxes, testing and other regulatory fees. These costs increase the price of state-legal cannabis at least 10%-25%—and often closer to 50%—above what is typically charged for illegal cannabis, depending on the state.

“Legal markets are losing sales to the illicit market in some places,” said Kris Krane, president of 4Front Ventures, a multistate operator headquartered in Arizona. “It seems to be more of an issue on the West Coast than it is in some of the East Coast markets.”

Why? Cannabis from western states is far cheaper because so much is produced, and the scale makes illicit products there more competitively priced. Illicit West Coast cannabis products also tend to be high quality, Krane added.

By contrast, illicit cannabis in the Midwest and on the East Coast is more expensive, giving these products less of a competitive edge versus legal merchandise, Krane said.

“It’s going to continue to be an issue—especially in a place like California, where there are so many regulations and taxes that drive the prices up. It’s just harder to compete with what are generally really good products on the illicit market that are much cheaper,” Krane said.

A line in the sand

For starters, many illegal operators want to become legal but can’t because of state license caps and/or local municipal prohibitions that limit the number of licenses to go around. Moreover, the relatively limited number of licenses that are available are prohibitively expensive for most illicit market players who want to go legal.

“The illicit market exists because the licenses are nearly impossible to secure. They are ridiculously expensive. The hoops are impossible for anybody to jump through. And, of course, they’ve seen the roll-up of cannabis industry licenses at a wide majority of publicly traded companies that are run by white, male boards of directors. It’s a huge problem,” said Debby Goldsberry, CEO of Magnolia Wellness in Oakland, California.

“The real issue is we have to get more licenses out there and we have to make the licenses more accessible. There’s the fundamental question that’s driving this whole thing,” Goldsberry added.

A dearth of local licenses in California, Massachusetts and other states have contributed to marijuana “deserts” that allow the illicit market to thrive.

Some operators also point to cultural issues—notably decades-old cannabis growing traditions in states such as California and Oregon—and consumer disdain for what’s perceived as the corporatization of cannabis.

“Cannabis consumers at large are ethical, socially responsible people, and big cannabis makes us feel sick,” Goldsberry said. “Turning the permits over to corporate cannabis is a giant turnoff for the cannabis culture. It’s very much part of what’s keeping the illicit market alive.”

Of course, legal operators want to see bad operators punished—particularly those who use dangerous pesticides or sell to minors—regardless of whether they are permitted. But not all underground operators are nefarious. Many are small growers with a passion for cannabis and cultivate it cleanly. Others are illicit dealers trying to keep friends supplied.

In fact, many licensed business owners are former illicit market operators themselves who empathize with those walking a mile in the shoes they used to wear. Many operators, despite having gone the legal route, still see cannabis first and foremost as medicine—and if an illegal source is a patient’s only access to safe cannabis, so be it.

“There’s still a market for people who go and find a pound of cannabis in Humboldt County (California) and bring it home and share it with their friends. The cannabis isn’t being tested, but by looking at it and feeling it, smelling it and even taking a little sip of it, you can tell the quality. I’m not sure if we want to get rid of that,” Goldsberry said.

Short of federal legalization—or at least banking and tax reforms coupled with many more states legalizing recreational cannabis—little can be done to eliminate the illicit market.

“It’s an issue, and frankly, it’s probably going to remain an issue until cannabis is legal nationwide and we can really enjoy the economies of scale of interstate, international commerce that’ll bring pricing down to a point where it’ll be virtually impossible for the illicit market to compete,” Krane said.

But why wait for federal legalization to compete with the illicit market? In the following stories, Marijuana Business Magazine shares insights and advice from cannabis executives familiar with this seemingly indomitable foe:

-The Most Confounding Competitor

-Stumbling Blocks from Illicit to Legit

-Will Federal Legalization Smoke Out the Illicit Market?

-Products to One-Up the Illicit Market

Get Our Daily Email
Get Our Newsletter »
Subscribe to the Magazine »