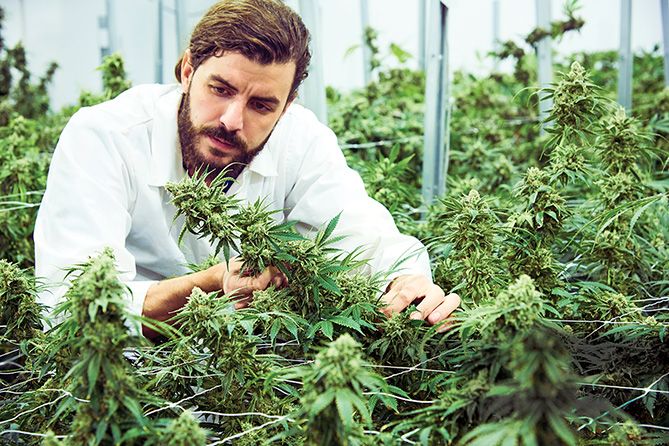 Other factors need to be accounted for, including temperature and humidity. But you can gain an edge by perfecting your techniques in certain areas related to proper lighting, including:

“Lighting is critical to your success,” said Gord Kline, head of cultivation at High Street, a vertically integrated cannabis company based in Canfield, Ontario. “It’s a combination of picking the right spacing, the right lighting, the right environmental controls and the right pruning.”

At Shift Cannabis in Boulder, Colorado, Director of Cultivation Cody Monroe defoliates his plants and removes the fan leaves to increase light penetration into the canopy.

He does this once in the initial growth phase, after he plants his clones into 1-gallon containers.

Monroe also will prune fan leaves during the flower stage, about two weeks into the cycle and again around four weeks.

“By allowing light to penetrate deeper into the canopy, you turn some of the lower leaves into more resources, because they’re receiving more photosynthetic radiation, where they can actually help support the plant,” Monroe said.

Brooks Lustig, founder of Denver-based vertically integrated cannabis company Seed & Smith, tries to push the limits on how much pruning his plants can take before there are diminishing returns.

“I would say we prune on the heavier side compared to most,” he said. “Depending on your grow system, you’ll see where the limits of that are and how far you can get that light.”

Keep your plants spaced in accordance with your lighting system.

For example, if one plant senses it’s touching another, it will start to shoot up rather than out, something you want to avoid in the early stages of a plant’s life, Kline said.

“If the plants aren’t spaced appropriately, depending on the type of lighting you’re using, you’re going to be disappointed,” he added.

At High Street, the cultivation team uses two different plant arrangements and lights in the same amount of space to ensure the plants receive adequate lighting.

On one side, 60 plants are “much more spaced out” under high-pressure sodium (HPS) bulbs. The goal is to create a much larger bud structure. Kline’s team pulls apart the upper branches and removes the small branches from the bottom.

“It opens the plant up,” Kline said. “We’re hoping to get light down to the very bottom and create a much bigger bud.”

On the other side, 300 plants are housed in the same space as the 60 under the HPS light, but these have light-emitting diodes (LEDs) installed above. This arrangement employs a more “sea of green” canopy style. With this arrangement, Kline said, you’ll get a more top-based product with trellised plants and smaller buds, but you can pack more plants into the space.

Monroe broke it down this way: If you cram your plants together in the vegetative room, you’ll get taller, longer plants rather than squatter, bushier plants, because they’ll compete for light.

When plants are growing into each other, you’ll get what Monroe calls a shade-avoidance response.

“It’s basically a way for the plant to try to outcompete its neighbors,” he said. “It causes elongation of the stems and will shorten your flowering time, which reduces your overall yield.”

It also causes your plant to grow upward rather than outward.

“I like to put the plants far enough away so they’re not touching. That way, your side branches are getting enough light,” Monroe said.

“If something’s in the shade, it’s not receiving as much energy as something that’s out in the sun, or in the light, so your production value is going to be limited,” Lustig said.

He tries to prevent the plants from competing by spacing them out. That way he gets light penetration through the canopy and can maximize the facility’s cubic footage, not just the square footage.

Kline attempts to mimic natural lighting conditions with his lights.

“When the plant starts off, you don’t want your light too intense,” he said. “In nature, the sun doesn’t flip a switch and get to a super intense point. It kind of ramps up to that.”

Lustig makes sure his lights aren’t too close to the plants, so they are not overloaded—but he does push the limit. The industry standard for micromoles (a scientific measurement for light particles) is 800-1,000 per square meter, he said.

“I can tell you that we run a more intensive system than that,” Lustig said.

“We stagger about half of our facility so that only half of our lights are on at any given time,” Lustig said. “It lowers the energy demand on the system, and it saves us some money.”

Monroe measures his light levels with a laser temperature gun. He shoots the laser at the leaf surface of a plant, hoping for 76-78 degrees. If you have too much light, the temperature will read warmer, he said.

“If it’s 82 degrees, what that’s telling me is that the plants aren’t actually using the energy I’m giving them,” he said.

Drooping leaves are another sign a plant has received too much light. This signals the plant is trying to minimize the surface area of its leaves to decrease the amount of light it’s taking in. That could also cause plants to flower less prolifically, Monroe said.

Cultivators commonly use cooler lights such as metal halides in early, vegetative growing stages and switch to hotter, red-spectrum HPS lights during flowering.

Kline said he starts his plants under metal halide lights because the blue spectrum increases vegetative growth and helps to build plant structure. Then, he moves them under HPS lights, the red spectrum, to spur flower growth.

“The light spectrum can dictate the height and shape of your plant,” he said.

Here’s how to keep counterfeiters from duplicating your marijuana products