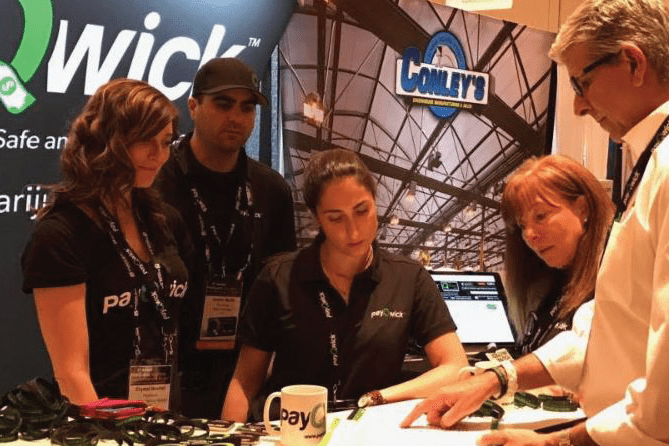 Perhaps the biggest logistical obstacle facing many cannabis businesses today is the reluctance of most financial institutions to serve the industry. Because of marijuana’s status as a Schedule 1 controlled substance, banks and credit unions remain vulnerable, at least theoretically, to criminal charges from the Department of Justice if they cooperate with plant-touching companies.

Members of Congress have introduced bills for years to try to solve the banking problem, which they view as a public safety hazard because many state-legal marijuana businesses are forced to do business in cash. But those attempts have failed, and the lack of banking services remains a top problem for the cannabis industry.

In response, a small but significant subsector of companies has emerged that focuses on connecting marijuana-related businesses with bank accounts and related services, such as the ability to accept electronic payments.

While the number of companies trying to solve the banking issue is sizable – the industry directory at MJBizDaily.com lists dozens of “banking and payment processing” companies – many are not reputable or simply don’t work.

“Effectively, there are only two ways to solve this problem. You can solve it overtly, or you can solve it covertly,” said Mark Goldfogel, executive vice president of Fourth Corner Credit Union in Colorado, which is mired in litigation with the Federal Reserve over its desire to serve the marijuana industry. (In 2015, the Federal Reserve Bank of Kansas City denied the credit union a master account needed to access the nation’s banking system.)

“Overtly,” according to Goldfogel, means cannabis business executives being up-front and honest about their business operations when attempting to land banking services. “Covertly,” by contrast, means disguising the actual business dealings — for example, a cannabis cultivator tells a bank that it’s in agriculture but doesn’t specify the plants that are grown and sold.

While there are many snake oil salesmen who promise the sky when it comes to cannabis banking, at least a handful of reputable companies are making inroads with financial institutions.

Over 300 banks in the U.S. are working with cannabis-related companies, according to federal data released last spring. However, many of those banks only provide temporary or limited services to cannabis companies that are in the process of obtaining state or local business licenses.

“In Pennsylvania and California, we’ve got a few new banks that we’re working with, but they’re only open to establishing capital accounts,” said Lance Ott, CEO of Washington state-based Guardian Data Systems, which helps cannabis businesses obtain financial services. “So it’s a holding company, while they get ready to apply (for business permits). But I can’t guarantee that those accounts will remain open once these folks become an active cannabis business.”

Steve Schain, a Pennsylvania attorney with the Hoban Law Group, said that by his count only 38 banks nationwide are working hand-in-hand with marijuana-related companies. There could be more than that, he said, but probably not a lot.

That means there’s a huge demand for anyone with a solid business plan on how to deal with the banking conundrum, and plenty of companies are actively working on just that.

No two banking or payment solution companies offer the same services. Some are extremely selective about their client base.

For example, Link to Banking, which is a partner of California-based Kind Financial, exclusively serves financial institutions that want to work legally with marijuana companies. That means it won’t take on clients such as the thousands of medical marijuana dispensaries in California.

“Link to Banking works with financial institutions in setting up their cannabis compliance, and secondly, we provide a software solution that gives the banks the necessary information they need in order to be in an over-compliant situation (with federal guidelines),” said David Dinenberg, founder and CEO of Kind Financial.

Other companies in the marijuana banking business – including Guardian, Tokken and PayQwick – take a different approach in helping cannabis companies obtain financial services.

California-based PayQwick, for example, has put together what its executives describe as a PayPal-like system: Cannabis clients – such as growers, retailers or other plant-touching businesses as well as MJ consumers – establish accounts through which they can pay each other.

In this system, Berke said, PayQwick relies on its own bank accounts and connections to support all the cash that client companies use in their accounts.

“It’s a banking interface … to allow our banking partners to extend services through us,” CEO Lamine Zarrad said.

All the companies, however, are swamped because of the demand for their services.

PayQwick’s Berke said “we are processing millions of dollars a month” in financial cannabis transactions. The company gets a small percentage of those transactions, again similar to PayPal’s model.

Guardian’s Ott said he’s overwhelmed with the demand as well.

Costs for cannabis companies that want to engage the services of companies like Guardian, Tokken and PayQwick can run the gamut depending on what they want or need. For example, Ott said he’ll provide a free initial consultation. But when it comes to hooking up companies with banking services, his fee will typically run about $5,000 — with half up front and the rest due once the company lands a bank account, plus a six-month guarantee.

“I’ve never had a client declined (by a bank),” Ott said. “I’ve been very lucky there. I even got one client a $1.5 million line of credit, from my bank in Illinois.”

PayQwick, meanwhile, is free to set up an account, Berke said, because the company turns a profit from the transaction percentages that it processes.

Tokken works the same way. The company said it has already landed roughly 75 clients in the marijuana industry even though it was founded only last year.

These are just a portion of the services offered by those three companies, however.

One of the biggest obstacles for these firms is getting their foot in the door of a cannabis business.

“In the industry, the biggest obstacle is skepticism,” Zarrad said. “If you’re a business owner, you’re bombarded with 30 or 40 vendor offers a day, and some of them are those dubious credit card-processing offers, and others are offshore banking options. So a lot of business owners are very skeptical.”

PayQwick’s Berke said one of the most common questions he gets is, “How are you getting around federal banking laws? Aren’t you doing something illegal?”

“We’re not getting around the federal laws. That’s not our goal,” he said. “We are complying with federal banking laws and state law, and that’s what makes the platform work.

“There’s so much misinformation out there about banking and the industry in general that it’s a challenge to get our message out, that we’re not breaking laws, that we’re actually complying.”

And it’s not just skepticism among marijuana companies. Financial institutions also remain wary of anything related to federally illegal drugs.

“There’s a lot of misinformation out there, and a lot of things that aren’t necessarily true that people believe,” Kind Financial’s Dinenberg said. “The reality is that, between the Cole Memo and the FinCEN Memo … there’s an outline of ways that financial institutions can work with the cannabis industry. So if you’re interested in participating as a financial institution, you have to learn (the guidelines), and you have to learn how the (cannabis) industry works. So misinformation is one of the biggest hurdles.”

Federal and local politics can also be a roadblock, Ott said. For example, he said two banks in California that were ready to begin doing business with Guardian Data Systems put the deal on hold because of uncertainty over the new Trump administration’s cannabis policy.

“One actually opened an account for one of my bigger clients and then temporarily suspended their program pending the outcome of the inauguration and confirmation hearings,” Ott said.

More Solutions on the Way?

While the banking situation overall remains murky and problematic, many in the space expect that even more highly competent firms will tackle the problem head-on. That means more competition for clients, but it also means there will likely be more widespread banking solutions in coming years, even without action by Congress.

Ott is further convinced more banks will be working with those in the cannabis sector as time goes on.

“We’ve already picked up banking in Pennsylvania, and we’ve got more banks reaching out to us all the time,” he said.

Dinenberg said he’s “bullish” on the future of partner company Link to Banking and believes more banks will come on board with the cannabis industry as they realize there are legal and compliant ways they can serve marijuana businesses.

Optimism over potential expansion in the cannabis banking business isn’t universal, however.

Tokken’s Zarrad pointed to the same political wariness about cannabis that Ott identified, saying that will have a twofold effect in coming years. First, it will stunt the growth of banking-oriented cannabis companies. And second, it will likely make banks more reluctant to work with MJ companies, because they’ll be concerned about further attention from federal regulators under the Trump administration.

“Currently, there are 300-plus banks that offer services, but I don’t see that number exploding, certainly not in the next four years. What I see is enhanced scrutiny from the federal government,” Zarrad said. “I think banks are going to start becoming a lot more careful in offering services, and they’re going to start looking at platforms that can extend those services through them and manage some of that risk at arm’s length.”

Zarrad has inside experience in such matters: He worked as a bank examiner for the Office of the Comptroller of Currency in Washington DC for almost two years before founding Tokken.

Time will tell whether his prediction bears fruit.

Nevada US attorney threatens to shut down cannabis event