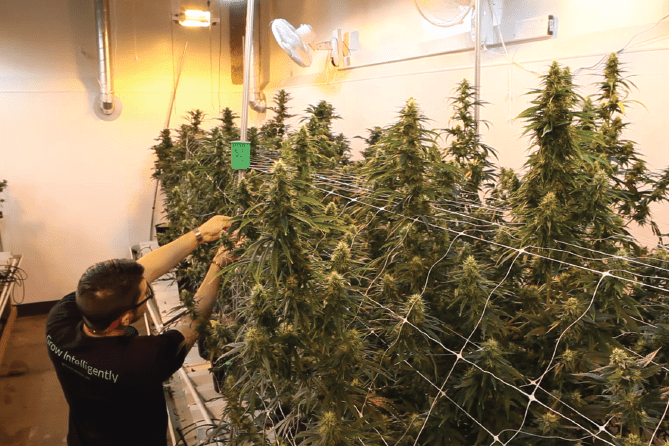 For decades, marijuana cultivation has been performed completely by hand, from growers in the mountains of California to basements in New England.

The use of automation applies widely, from computer-controlled automatic irrigation and nutrient dispersal to machine trimming during the harvest cycle, and an array of businesses has arisen to provide business solutions for cannabis growers.

Along with automation comes a host of benefits, including cost savings on manual labor, more standard product results, and the elimination of inefficiencies and financial waste, as well as the compilation of data that growers can use to hone cultivation techniques.

“We definitely see the future as being a complete, contiguous automated solution, that you’re basically feeding on one end and monitoring as it does all the work for you,” said Cullen Raichart, the founder and CEO of GreenBroz, a California company that specializes in automatic marijuana trimming machines.

“There’s no way it doesn’t go that way. If you look at the rest of agriculture, you can look at big mushroom packaging machines or strawberry sorting machines,” Raichart said. “Sorting, packaging and cleaning – nobody does that by hand. All that’s done already by machine. And with cannabis, we have the opportunity to do the same thing.”

The opportunity to implement automation will likely rise as the industry grows because it helps reduce overhead. And cost-cutting will grow increasingly important as marijuana becomes more of a commodity and wholesale prices drop.

“If people are using data to make good, informed decisions, it’s going to reduce the overall cost of operating, which is going to reduce the cost of every pound they grow, which is going to make them a lot more relevant and a lot more profitable,” said Skye Hanke, co-founder of SmartBee Controllers, a Las Vegas-based automation company. “Efficiency is the key to winning the race, and how can you be efficient if you don’t know what’s going on?”

A handful of automation companies offer differing services and products – many of which can be integrated within marijuana grows – so some cultivators may want to take advantage of services from multiple automation firms.

For instance, a cultivator with a 50,000-square-foot indoor grow could decide to buy irrigation and nutrient-mixing automation systems from HortiMax, a Netherlands-based company with roots in the traditional agriculture industry, and combine that with an automatic trimmer from GreenBroz.

However, automation should be viewed as a complement to a grower’s strengths, not a replacement for manual labor, several company executives said.

“The real botany is left to be done,” said Vincent Harkiewicz, the chief information officer of Colorado-based Grownetics, which offers an online platform combined with garden sensors to help growers monitor and adjust automated settings – such as temperature and humidity – within marijuana grows.

“It’s like SimCity or Farmville but made into a real-world tool,” Harkiewicz said, comparing his company’s central product line to the popular games. “It helps them basically extend their reach to a huge facility. Where one grower typically may be able to manage below 5,000 square feet if they’re really capable and working crazy hours, now one grower can handle 30,000 square feet because they’re everywhere at once, essentially.”

Though Grownetics, founded in 2015, has only five customers, its technology has drawn plenty of business interest. Harkiewicz has fielded inquiries from companies as far away as Germany, Israel and Australia, as well as from businesses in Canada and Puerto Rico. And Grownetics’ revenues are already in the hundreds of thousands of dollars.

Other automation companies, like Canada-based Argus Control Systems, have hundreds of cannabis clients. Yurij Duda, general manager of Argus, said the percentage of his firm’s business stemming from marijuana (as opposed to traditional agriculture) has more than doubled in recent years.

Wil Lammers, the chief commercial officer for HortiMax, said his company’s revenues from U.S.-based marijuana companies were roughly $2 million in 2016, up from about $400,000 in 2015. He expects that number to increase by about 50% in 2017.

“We aren’t able to keep up with all the inquiries we get,” Lammers said. “I just don’t have the bandwidth right now.”

One drawback to technology for many cultivators can be the upfront costs. But automation company executives say the return on investment is quick. And costs vary immensely, depending on a client’s needs and how big a grow is.

“We can outfit a home grower who has two lights in his garage, and the barrier for entry for our system is around $2,100,” SmartBee’s Hanke said. “And it can go up from there, depending on how many sensors and the granularity of data they would need.”

The cost of a GreenBroz trimmer, for instance, starts at about $5,500. HortiMax has an entry-level system that costs around $3,000.

On the higher end, however, costs for automation can easily reach the hundreds of thousands of dollars, especially for larger grows that may cover tens of thousands of square feet. Grownetics’ Harkiewicz, for example, estimated it would cost $300,000-$500,000 to outfit a 50,000-square-foot greenhouse with one of his state-of-the-art automation solutions.

But in the long term, he said, that initial investment could easily be offset by up to 80% savings in energy costs. Which means it’s important for growers to crunch cost-savings numbers before investing in automation systems.

“The ROI on one of those systems is pretty quick, and that’s where cannabis growers in particular find a lot of value,” Argus’ Duda said of his company’s fertigation systems. He noted his systems, which apply fertilizer with irrigation water, are popular with marijuana cultivators. Argus’ various automation systems, depending on how complex a system a grower wants, can run from $15,000 up to “the high six-figure range,” he added.

“We’ve had some users that have seen an ROI in a few weeks or months just by tuning up their nutrient deliveries,” Duda said.

The biggest obstacle for many automation companies is convincing clients the investment is worth the expenditure.

“You have to gain confidence from the customers before they’re going to buy in. It’s always, Why should I trust you? What are you going to give me that’s going to be different than what I’m already doing?’” SmartBee’s Hanke said. “Once they realize the value they get from it, it’s a no-brainer.”

Another factor, HortiMax’s Lammers said, is that many cannabis growers have a background in the black market, which means they either trained themselves or aren’t up to speed on mainstream, time-tested cultivation practices. That can lead to resistance to change, he said.

“That is an obstacle, because many of the growers think they don’t need (new automation techniques) because they’ve been (growing marijuana) for so long and they’re happy with the results they’re already getting,” Lammers said. “But if more people jump into this, it’s just a matter of time before the competition is there and it becomes a commodity. The guys who don’t invest in the technology to do this right will have a tough time.”

Yet another hurdle has been the general industry atmosphere of secrecy when it comes to sharing best business practices, Argus’ Duda said. That winds up hampering progress when it comes to topics like automation, he said.

“There’s a bit of secrecy in the industry which doesn’t really exist in commercial growing,” Duda said. “They feel they have the secret sauce in how to grow and process their product, and they do not want to risk that at all because it’s their competitive advantage. People need to open up and share their best practices. It just benefits the industry as a whole.”

This technological movement is tied directly to what many expect will be a rise in large-scale commercial marijuana grows. As bigger companies begin to bring enormous grow operations online, they will find it cheaper and easier to implement automation throughout the cultivation process.

“We’re going to see bigger growers growing more cannabis under fewer brand names and fewer operations,” Duda predicted. “What that means is, as the grows get larger, you’re going to see more and more automation because they’re going to want to optimize not only their production but also minimize manual labor that’s involved in operating those facilities.”

Cannabis cultivation companies are likely going to embrace more practices from traditional agriculture as the industry moves toward the mainstream, Lammers said.

He cited one large-scale marijuana client of HortiMax’s, noting the company had hired a veteran of the tomato industry who has two decades of experience in commercial agriculture. “He’s taken what he knew from 20 years of growing tomatoes, and he applies that straight into the marijuana process,” Lammers said.

Adaptation like that means, in part, more automation when it comes to tasks that are easily completed by machines, such as mixing and dispersing nutrients, adjusting temperatures and literally turning lights on and off.

The U.S. market may soon be in the position of playing catch-up to marijuana industries in other countries, Grownetics’ Harkiewicz predicted, simply because other nations are focusing at the outset on strict quality-control standards.

Such competition, he said, is going to have a direct and serious impact on cannabis cultivation practices in the United States. It likely will play straight into the growth of automation, which can help companies bolster quality control.

“Everyone who’s serious about cultivation is looking for federal legalization, so we can continue to pioneer in this space and continue to lead the industry,” Harkiewicz said. “We’re getting taken over by Canada, and pretty soon, some of these other countries coming online with their stringent requirements could also have large investments into more innovative growing solutions.

“So I’d say really the trend toward quality is going to be huge, not only for regulators but for cultivators.”