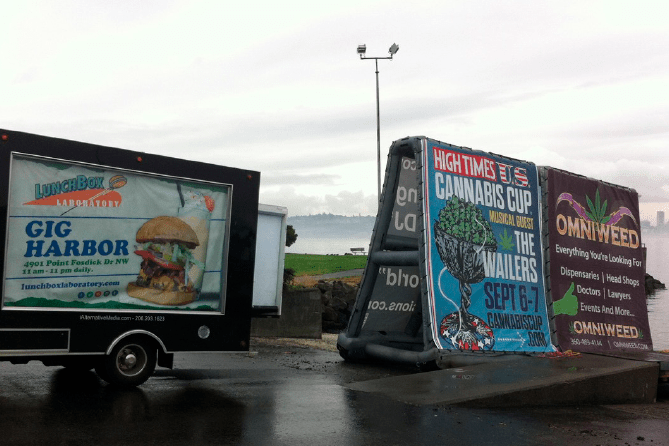 Cannabis can indeed sell itself, especially in states with recreational markets such as Colorado and Oregon.

Word of mouth can account for a lot of sales. But cannabis entrepreneurs with a longer-term vision for their company are realizing that an integral part of a multi-year plan is building a brand. That means seeking out cannabis marketing and advertising professionals.

Those who think otherwise may be in for a shock down the road.

“They’re selling cannabis, and they can’t keep enough inventory on their shelves to keep their customers happy. So why do they need to spend money on advertising?” Lee Weiner, the owner of Denver-based 7 Leaf Marketing, said. “If the goal is to grow your company, and if you’re one store and you want to be two stores … how are you going to continue to grow your brand? It’s not just going to happen through word of mouth because you sell (marijuana).”

But marketing and advertising for cannabis companies is far from a one-size-fits-all setup. Hundreds, if not thousands, of businesses offer varying types of such services to marijuana companies, largely because most traditional avenues aren’t an option.

“About 80% of what you can do in the advertising world is locked off from the cannabis world,” Darran Bruce, the owner and founder of Independent Alternative Media in Seattle, said.

Chalk it up to marijuana’s ongoing status as a federally illegal drug, which means that the vast majority of TV and radio stations won’t touch cannabis-related ads. Many states also have erected regulations that limit the industry’s advertising options.

That, in turn, means marijuana companies – even ancillary ones – must be more creative when it comes to marketing and advertising.

Estimates on how many companies provide such services range from a few dozen to a few hundred. But one thing is for sure: Precious few focus exclusively on the cannabis industry.

Even those that do often diversify their businesses so they don’t have to rely on marijuana marketing for their income. Denver-based Iris, for example, only gets about 50% of its revenue from the cannabis industry, while Seattle’s Independent Alternative Media only gets about 25% of its business from marijuana.

“It’s constantly growing,” said Bruce, adding that his company’s revenues from the cannabis industry have been steadily increasing.

Other firms also are ringing up healthy sales growth.

The Innovation Agency, based in the Los Angeles metro area, does more than a million dollars in annual revenue, said Randall Huft, the company’s founder and president. The firm was founded as a traditional ad agency in 2004 but wound up pivoting to cannabis about four years ago after a single client was incredibly happy with its work.

A lot of firms offer a variety of services that range from designing and placing print ads to online advertising, email marketing and video ad production. That’s because different clients often want different services, and also because marijuana marketing typically must be a little more creative than traditional marketing and advertising.

But some take a more specialized route and carve out a niche. Alternative Media, for instance, rents out mobile billboards. It also focuses on posters, “street teams” that promote events, products and brands, and low-cost “guerrilla marketing” tactics. But part of the company’s broad appeal around Seattle is its iAm”phibious” billboards, which are basically aquatic billboards that motor around Puget Sound, sporting ads for whoever’s paying it – including cannabis companies such as Weedmaps.

The Denver marketing firm Iris focuses solely on paid social media advertising. Founder and CEO Gavin Beldt said navigating social media can be tricky for legal marijuana companies, with Facebook and Instagram shutting down MJ business pages for no explicit reason other than they’re connected to the cannabis industry. A lot of pages have been shuttered, while others have remained untouched. Facebook has not given any explanation.

“Since we mostly dabble in paid social media, and we’re lean and mean … the demand is insane for what we do,” Beldt said. “I can walk into about any room, show people what we’re doing, and they’ll sign a (contract) the next day.”

The biggest hurdle for marketing and advertising firms often is simply convincing marijuana companies they need to advertise. And for some firms that means converting clients to 21st century techniques, such as digital marketing and utilizing social media.

“Our biggest hurdle to date has been getting these brands to understand the importance of digital marketing and getting with the times and getting outside some of the archaic measures they’re using to market their brands,” Beldt said. “A lot of our clients take months before they understand why we’re doing what we’re doing and why it works so well.”

Apart from that, the lack of traditional outlets such as radio and TV is a constant challenge.

“We even created jingles for some of our clients,” said Huft, referring to his pre-cannabis marketing days. “All that came to a screeching halt, because for the moment, there is no marketing in TV and radio. So we’re doing other things. We’re shooting videos … that our clients will be putting on YouTube and online and on social channels.”

Constantly changing regulations, and many of the industry laws in general, are also a challenge, said Center Mass Media’s Ramsay. For example, he said, it’s illegal in Colorado to transport infused products to a secondary location for a marketing photo shoot: Companies generally must ship product straight from the factory to wherever they’re sold.

Weiner said another issue that may be specific to Colorado is that cannabis companies aren’t allowed under state law to deduct any expenses they spend on marketing or advertising. That makes it even more expensive to engage in those activities, effectively discouraging marijuana companies from trying to get their names out there.

“The state regulations weren’t set up to promote marketing and advertising,” Weiner said.

Because federal opposition is likely to continue for the near future, many in the cannabis marketing trade expect that creativity will continue to be the name of the game.

“Companies like mine are going to be at the forefront, because we’re able to get around the rules and regulations,” said Independent Alternative Media’s Bruce. “Alternative advertising is going to be where it’s at. Nontraditional, mobile billboard trucks, bicycle advertising, things of that nature to get the word out.”

The Rise of Data

As the cannabis industry grows, it will take closer note of what customers buy and why, predicted 7 Leaf Marketing’s Weiner. That data collection is going to give rise, in turn, to different marketing strategies. It also will influence product development, he said.

“Marketing is all based around data. So collecting the best data possible, being able to parse through that data and segment it properly – who likes flower, who likes edibles, who likes extracts – and being able to market out to those people effectively will come as the industry matures,” Weiner said.

Marijuana advertising is merging slowly but surely with the mainstream, said Center Mass Media’s Ramsay, who revealed that his company has already been in negotiations with some radio stations over cannabis ads. The question, he said, is timing.

He predicted that once more executives at TV and radio stations get comfortable with the idea of taking the cannabis industry’s money, “you’re going to start seeing it hit mainstream, like alcohol.”

Both Digital and Personal

As marijuana companies start to look for more ways to get their brands in front of customers, Iris’s Beldt said, they’re probably going to start utilizing two major tools that have so far been under-used: digital platforms and budtenders.

“Snapchat is going to be massive for every industry that’s out there, but especially for cannabis,” Beldt predicted, adding that retail staffers on the front lines can be just as valuable on the advertising front for marijuana brands.

“Budtenders are highly undervalued as employees. From a marketing standpoint, those people are going to be more and more embraced,” Beldt said. “We really want to build relationships with the people that are talking about the product.”