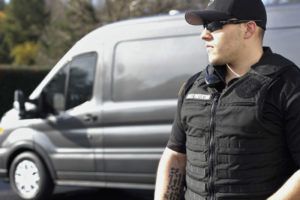 To state the obvious: Marijuana is valuable.

So is everything involved in growing, processing, transporting and selling it.

That value, along with plenty of state and local government rules requiring marijuana companies to implement security measures, has given rise to a thriving industry niche focused on helping cannabis businesses protect their assets and employees.

“The cannabis industry is really not that unique,” said Tony Gallo, managing partner of Texas-based Sapphire Risk Advisory Group. “If I took a dispensary and put jewelry in there, it’s really not that different.”

Despite the similarities, marijuana businesses do have one added wrinkle: Many must deal in cash, which is risky.

It’s for all these reasons that marijuana entrepreneurs must pay to protect their businesses and employees. Costs to get a comprehensive system installed (including cameras and alarms) can typically run into the tens of thousands of dollars or more, depending on how secure a company wants to be. Ongoing costs, such as monitoring services and guards, add to the bill.

Dozens of security firms around the country are willing to help cannabis business owners figure out what they need or want. Some focus on security consulting (like Sapphire), while others specialize in video surveillance installation, armed guards, transportation or other areas. There are a handful of full-service security companies, but not many.

The options available to cannabis companies can vary greatly depending on the size of the business, the square footage of the facility, the number of employees and a company’s budget. For example, a 50,000-square-foot indoor grow operation will have vastly different security needs than a small, four-room cannabis retailer.

“A security system can be as inexpensive as $5,000 but can be … over $250,000, depending on the size and the complexity of the job and what kind of processes they’re going to be looking for from a security system,” said Tom Siciliano, president of Colorado-based Canna Security America.

As the cannabis industry has grown, so have companies that provide security services catering to marijuana businesses. That’s due in large part to business licensing requirements that mandate minimum security thresholds, said Noah Stokes, the founder and CEO of Oregon-based CannaGuard Security.

“When people are calling us, they’re calling for a compliance system, not a security system,” Stokes said.

Many cannabis companies initially aim for a handful of video cameras and alarms to satisfy state or local government inspectors. These companies also often want to set up security on the cheap, as opposed to spending, say, $60,000 on a system that will really protect a business.

But that has led to repeat business for many cannabis security companies because their clients grow and either want to expand or beef up the protection of their investments.

A fair share of security companies are experiencing rapid growth.

One of the biggest obstacles many cannabis-related security firms face is customer education, since there’s such a wide range of options for marijuana companies and many run their operations on a budget.

“Getting people licensed and compliant is the first thing we do. … Then the next stage is actually securing the facility,” said CannaGuard’s Stokes. “We get them a system that can get them open, and six months later, they have 20 employees, they have 10 rooms full of plants, they have a bunch of cash … and now their compliance verification system that they bought from me six months ago doesn’t help them sleep at night very well.”

So a lot of customers end up returning to their vendors and want to either upgrade or replace their security systems so they’ll be safe and feel secure.

All the executives Marijuana Business Magazine spoke with for this article said there’s no way to stake out how much a given security system will cost. But Gallo estimated a typical cultivation operation should budget around $80,000-$100,000 for security, while a retailer should probably set aside $30,000-$40,000.

“I can probably get a camera for $80, and I can get a camera for $1,200. But what are you trying to achieve with that camera?” Gallo said, referring again to the issue of customer education and whether a client wants to spend a little or a lot to safeguard their business and employees.

There’s also the problem of constantly evolving security mandates from state and local governments. That’s a hassle for plenty of security businesses that need to know exactly what their customers are required to have, as well as what will work best.

“One thing I don’t like about the law is it’s ever-changing. You have to keep your eye on it. … Over the last four months I think they changed the camera system requirements maybe three times,” Dru Perez, the co-founder of Portland, Oregon-based D&L Securities, said of regulators.

This is probably the biggest change that’s already coming down the pipeline. For example, SecurityBud’s Hernandez is keen on what he calls “integratable” security systems, which can all be controlled from a single piece of software.

“Integratable means it can also monitor your access controls, so you can make everything work in unison on one interface. Your cameras, your access, your alarm system, everything is there at the click of a mouse, so to speak,” Hernandez said. “The real specific, facial recognition, where it’s cataloguing everybody, and the license plate recognition, where it’s cataloguing plates, basically all the integratable features, if you want to control everything from one app, that’s all built into these higher-end systems.”

Those systems can cost $80,000 or more, however. But they also could be worth it, depending on the size of the business and the value of the inventory that system is protecting.

“The thought of a drone with a camera on it that a guard at a 20-acre grow facility can put up … and it flies around at night with a heat sensor on it, that might be a trend. Think of the value of something like that,” Gallo suggested.

There are already cameras that can register heat signatures from human beings. It doesn’t seem like a huge leap to put such a camera on a drone and pilot it remotely around an enormous outdoor cannabis farm.

In those cases and more, technology will also help cut down on manpower and the need for guards, said Whitus of Helix TCS.

“We’re going to take full advantage of that in the future,” Whitus said.

As with nearly every sector of the marijuana trade, those in the security business expect more competition to crop up in the coming years.

“As the industry as a whole starts to evolve, you’re going to start seeing more mainstream companies, the ADTs of the world, and that’s going to be a big challenge for the companies that are out there,” Gallo predicted, referring to the corporation that provides security and alarm monitoring services.

For example, Rolland Safe & Lock Co., a Dallas company with roots dating back more than a century, is among those catering to marijuana businesses.

And the competition isn’t only coming from other security companies, he added. It’s also stemming from businesses trying to set up their own security systems on the cheap, since the price of cameras has plummeted over the last decade, by roughly 50%.

“People didn’t have that option to go to Costco 10 years ago (to buy high-quality security video surveillance cameras),” Hernandez said. “Now, they have hundreds of options. It’s become much more competitive.”