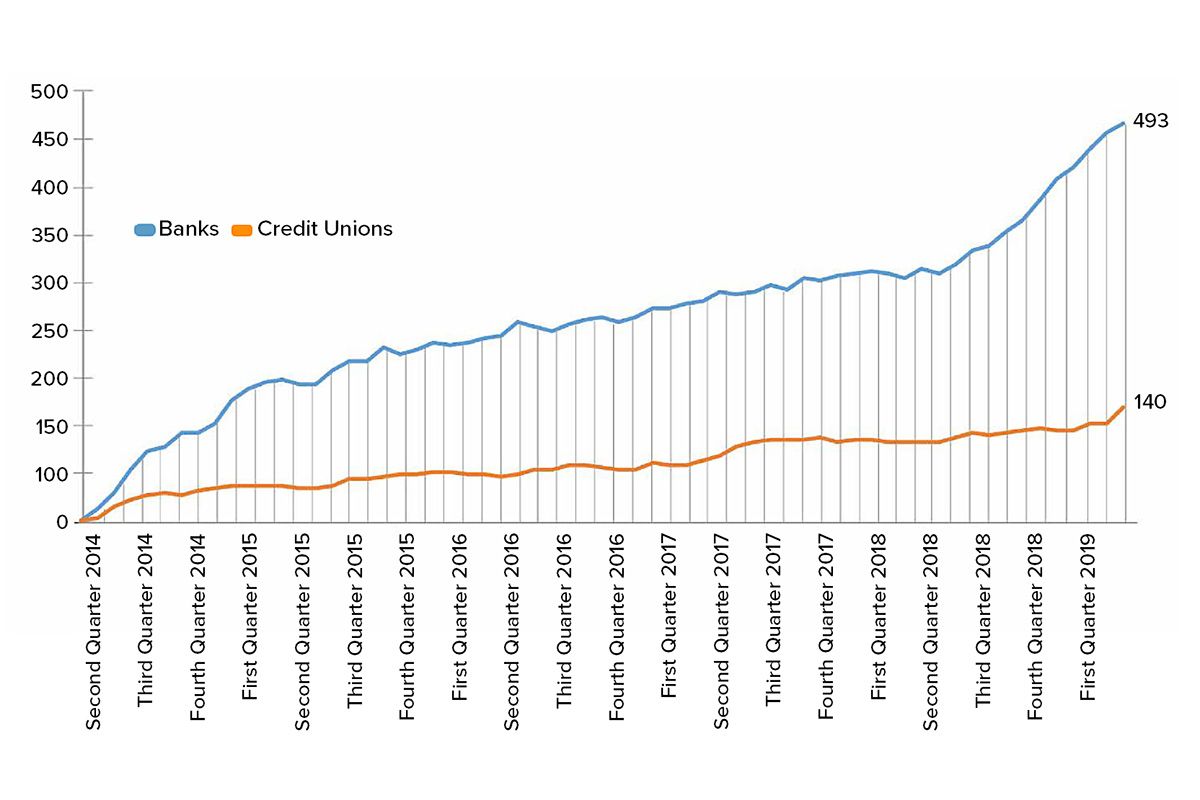 Getting a bank account remains one of the most difficult challenges of running a marijuana business, despite greater public, political and legal acceptance of cannabis.

While banking pickings are slim—roughly 630 banks and credit unions were serving U.S. marijuana-related companies as of March 31, according to federal data (see chart)—every state has at least one financial institution that serves cannabis businesses, said Gary Rosen, a partner in the advisory group of New York City-based Marcum, a national business and accounting firm.

What does it take for a marijuana business to land an account at one of these banks or credit unions? It depends on the internal financial and compliance controls the business has and how thorough and organized its records are. The state where a marijuana company operates can also play a role.

Many state-legal markets, both new and old, tailor their regulations to compel marijuana businesses to meet certain recordkeeping requirements. Those and other requirements make it easier for banks to fulfill their reporting responsibilities to FinCEN.

“Generally, the tougher your regulations are, the easier it is to gain banking, because the financial institutions feel more comfortable that they can honor the FinCEN guidelines,” said Los Angeles cannabis attorney Hilary Bricken.

Bricken offered Washington and Nevada as examples of states where the regulations make it easier for banks to take cannabis clients.

Washington state, she said, is “protectionist,” with a “significant residency requirement,” plus “a small industry population” and a single regulatory entity that oversees everything.

“Those factors combined have really opened the doors for banking with regional banks and small credit unions,” she said.

As for Nevada, Bricken said, “they (regulators) treat their cannabis businesses like casinos, with very severe consequences for violating the rules. They’re very concerned about the impact at the local level, so it’s very tightly regulated at the state level and at the local level.”

Other states where banks have shown a greater-than-average willingness to take cannabis clients include Florida, Illinois, Massachusetts, Minnesota and New York.

“The East Coast states on the whole figured out really quickly that if they wanted their programs left alone by the feds, they needed to have robust regulations. That, in turn, made finding banks easier,” Bricken said. “No bank will participate unless the state has created an infrastructure that will tell the bank everything it needs to know off the bat.”

By contrast, states that have been more difficult for finding banks include Arizona, California and New Mexico, Bricken said. California’s rules are relatively new, “and some of them are still playing out, relative to transparency and accountability. There’s still a lot of bad behavior,” Bricken noted. “So, financial institutions (in California) have more fear regarding their ability to meet the FinCEN guideline expectations in taking on these accounts.”

Put Your Bank at Ease

What do banks like to see in terms of internal controls? “Segregation of duties, where the person depositing the cash is not the same person handling the cash at the register. You have an independent person doing the bank reconciliations. You have someone checking the cash receipts against the cash that’s received,” Rosen said. And while hiring new staff to meet these demands doesn’t hurt, smaller businesses can get by with existing employees.

“It doesn’t have to be a skilled accountant. It could be one administrative person who counts the cash at the end of the day, who’s separate from the cashier themselves. There might be a third person—possibly the owner—that reconciles and posts the cash receipts and other revenue streams to the books of original entry at the company.”

In addition, businesses seeking out banks will have better luck with state-chartered rather than federally chartered financial institutions because they “think more locally,” Rosen said.

Because of the work required of financial institutions to service the marijuana space—banks often are required to hire new compliance employees, buy new recordkeeping and reporting software, etc.—marijuana executives should expect to pay fees that are far higher than the fees mainstream companies pay. According to one report in early 2018, for example, a Maryland bank charged a cannabis client $1,750 per month.

Rosen expects those fees to come down, perhaps in a few years. “As the cannabis companies generate more revenue and it becomes more accepted, I think those fees will be driven down by the volume of the transactions,” Rosen said.