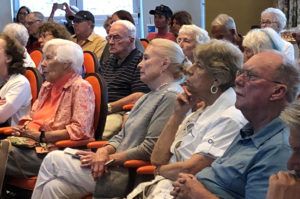 Talking about CBD in a nursing home? You’d better bring extra chairs and slices of cake for the overflow crowd. Your audience will be all ears.

That was the case at one northern Colorado nursing home that offered a lecture about cannabis and Alzheimer’s. The crowd listened intently to a physician describe what happens to people taking CBD.

“You’ve been told for years that it makes you stupid. It doesn’t,” said Dr. Joseph Cohen, a physician who recommends cannabis and gives talks about the drug to packed rooms at assisted-living facilities in Colorado.

“We’re wired for this plant,” Cohen went on. “It’s like turning a key in a lock.”

The audience was rapt. Attendees hardly needed Cohen’s intro about how CBD is different from THC. They knew all about cannabidiol.

Combine the aches and pains of aging with seniors’ concerns about taking too many pharmaceuticals, and it’s easy to see why CBD is taking off with older adults.

“I hurt my knee a couple years ago, and my wife and I were really against it, CBD,” said Terry Huffman, a 65-year-old who heard Cohen’s talk. “My neighbor gave me some CBD and said, ‘This doesn’t have even a little THC in it.’ I tried it, and it took the pain right out of my knee.

“People my age are very slow to consider (CBD) because they have heard such negative things about marijuana. But that is changing so fast,” he said.

Consumers 54-75 years old made up a healthy 15% of recreational cannabis sales in Washington state last year, according to the 2018 Marijuana Business Factbook. And compared to millennials, the largest age group buying recreational cannabis, baby boomers spend more in recreational stores and are less deal-driven than younger shoppers.

From AARP message boards to senior citizens’ outings, the cannabis industry is starting to capitalize on the trend with products and pitches tailored to older adults.

“We want to be careful about recommending THC for people who may have memory problems,” he said. “You don’t want to walk into a room and forget why you walked in there. With CBD, you don’t get that.”

Another aspect of CBD that appeals to older consumers is that it’s most commonly sold in edible or topical form, not smoked.

“You don’t have to smoke a joint with this stuff,” Cohen said. “There are tablets, pills and tinctures. You take it how you need it.”

Kate Heckman, Stratos’ director of sales and marketing, said that sponsoring cannabis talks in assisted-living facilities has helped the company target its health and wellness message to a new audience hungry for education.

“They’re the largest-growing demographic of cannabis users,” Heckman said. “It felt like a really natural pairing for us.”

The 10th annual MJBizCon will be held
live in Las Vegas + online: