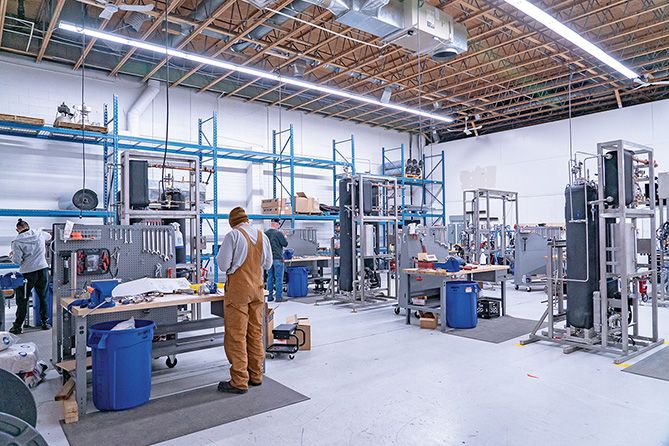 When Vitalis Extraction Technology set out to design an improved pump system for use in CO2 extraction, the Canadian company had two goals:

To accomplish this, the company spoke extensively with cannabis extractors across North America. In addition, it turned to engineers in the highly regulated oil and gas industry to ensure its CO2 pump would meet tough standards and regulations—both today and in the future.

“We never wanted to sell or represent a piece of equipment that could later become obsolete,” Vitalis chairman and co-founder Joel Sherlock said.

Given the evolving cannabis regulatory landscape in North America and Europe, Vitalis also designed its pump system to qualify for advanced equipment safety certifications and built in components to allow cannabis extractors to meet future health standards regarding the composition of concentrates.

Sherlock expects that the federal governments in Canada—where cannabis is legal—and eventually in the United States will implement stiff regulations covering a variety of areas.

“Regulations are going to be hugely increased,” Sherlock said.

The regulations are expected to concern both the equipment itself and product safety. Sherlock said that extracts, for example, will be subject to testing for pesticides, heavy metals and/or other pathogens.

“Regulations are going to be hugely increased, because the Europeans are going to demand it if you want to export product from Canada into a medical market in Europe.”

Initially, Vitalis’ quest to design a reliable, industrial-size CO2 pump led the company to consult laboratory equipment manufacturers for help. However, it encountered only obstacles.

“I would receive pushback on how challenging it would be to make a vessel at (high) pressure and (large) sizes,” Sherlock recalled. “They were like, ‘Oh, there’s dimensional-pressure issues. I don’t know how to make a cap that big. The clamps would be incredibly massive.’”

It wasn’t until Vitalis consulted oil and gas industry engineers that it found a solution.

Oil and gas “engineers come out of a world where it’s a hyper-regulated market, and they make extractors with tons of capacity, pressure vessels rated to 35,000 psi, etc.,” Sherlock said. They design “large industrial equipment that is outdoors in the rugged cold or blistering heat, and it needs to perform 24/7.”

The oil and gas engineers the company ultimately hired, for example, were able to build a durable pump that operates continuously and a system that can be scaled to any size or pressure clients require.

“Nothing was too big or too complicated for them,” Sherlock said, referring to the 5,000-pounds-per-square-inch, 100-liter (vessel capacity) system the engineers initially designed for Vitalis. The company currently manufactures systems with vessel capacities of up to 200 liters and has designed an up-to-2,000-liter system for future launch.

While the investment is costly and time consuming, Vitalis expects it to pay off in the long run, because obtaining such certifications both ensures equipment safety and gives clients a competitive advantage.

“If you had bought a Vitalis and your competitor had bought an X, Y or Z, and all of a sudden they got shut down (but) you were allowed to continue running, that’s a long-term benefit,” Sherlock said.

Certifications aren’t the only concern when it comes to equipment lifespan. As an extractor’s business grows and/or product and processing requirements change, equipment upgrades become necessary. Moreover, Vitalis wanted to ensure its pump would not require costly repairs.

“Downtime in the cannabis industry can be even more costly (than in oil and gas) … and delay is unacceptable in an industry that’s moving so quickly, especially when you get into medical markets,” Sherlock said.

Consequently, Vitalis’ pump system is modular: The technology can be readily and cheaply adapted simply by adding or removing sections.

Manufacturing in-house also facilitates ongoing innovation, which Sherlock touts as even more important than the patent Vitalis holds on its pump system.

“I think innovation is going to keep us at the top of this industry, not necessarily the patent,” he said.

By way of example, he cites Vitalis’ development of a customized solution for a client that later became part of the company’s own pump system.

“(The) client was looking to do a terpene pull before he did his supercritical extraction,” Sherlock said. “And he wanted to do that hyper-cold. Then he wanted to flip over and go into supercritical extraction. So, we designed a needle valve … which gave us really finite control. And that was something that worked exceptionally well. With his blessing, we built that into our standard equipment.”