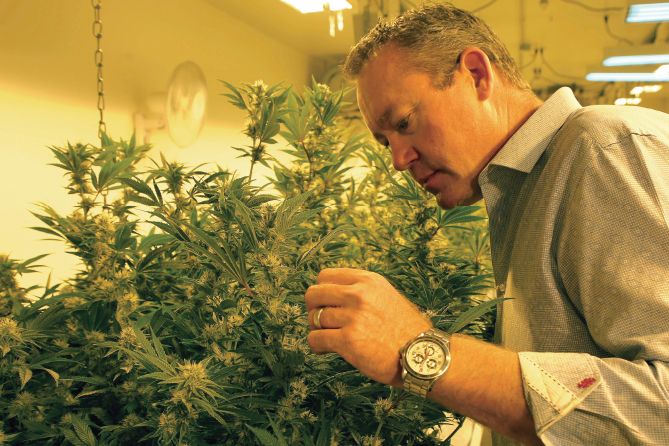 To remain competitive, set aside space in your grow to experiment with new cultivation methods and technologies

With technology and cultivation techniques developing all the time, it’s imperative for cannabis growers to experiment with new growing methods to stay ahead of competitors.

But you don’t want to risk your entire crop by introducing something new all at once. Instead, consider setting aside a room or a section of your facility to try out different growing methods and technologies.

Experimenting with new techniques on small samples of plants can lead to increased production, better efficiency and lower costs – all without risking the health of your entire crop.

Rooms can be set up to experiment with nearly all parts of the cultivation process, including:

Just remember that not every test will produce successful results. And experimentation takes time and money.

However, even occasional success can be a boon to your company’s long-term health.

“Without this research-and-development mentality, you run the risk of going out of business because your other competitors are pushing the envelope and you’re left in the dust,” said Jonathan Cachat, CEO of Cleveland-based CCV Research, which develops new indoor cultivation techniques.

It’s also something many cultivators are simply naturally interested in.

Gary Mancini, co-founder of San Diego-based Innovative Solutions, said that even though his company offers case studies and data when providing air purification and sanitization equipment to cultivators, growers still want to try out the new gear.

“With the value of a crop it makes sense to me that before (a cultivator) makes any major change in the process that they would test it on a smaller scale somehow,” he said.

Tim Cullen – CEO of Colorado Harvest Company, a vertically integrated cultivation and retail business in Denver – noted that new technology is entering the market constantly. And while not all of it is something his company wants to pursue, “some of it is,” he said. “And the only way to really test it is to run an experiment with it.”

He has set aside a 2,500-square-foot room with 22 lights for experimentation.

“(That’s) enough of a sample size to make it valid,” Cullen added. “To be able to look at different aspects of plant production.”

Putting Lights Under the Spotlight

Cullen said the initial test resulted in yields of an extra half a pound per light. A second test produced the same outcome, so Colorado Harvest Company applied the results to its entire operation, resulting in a purchase of more than $200,000.

“Switching lights is a huge consideration for any operation because you don’t know how it’s going to affect yields or product quality,” he said.

If you’re drastically changing your types of light – from high-intensity discharge (HID) to light-emitting diodes (LEDs), for example – you must fundamentally approach growing differently.

“So, it makes sense to test first,” Cachat said.

Cachat would like to see more light experimentation to develop cannabinoid synthesis.

To Cachat, that’s the next frontier in marijuana production.

“To stay relevant in this rapidly normalizing and expanding industry, it’s going to take much more than to just be the next Skittlz or the next Tangie,” he said. “It’s can you get the new cannabinoids? Can you get CBG? Can you get THCV?”

Cullen’s current experiment is based on a book, “Three A Light,” whose title references a yield of 3 pounds of cannabis per light. The gold standard has been trying to get to 2 pounds per light, he added.

After the book came out in 2015, Cullen’s team read it and incorporated the recommendations. But before Cullen and his team changed everything in the production facility, they decided to run the new system in the experimental room for two harvests.

“If we can get an extra pound per light it’s absolutely worth it to go through that experiment,” Cullen said.

About one in four of Colorado Harvest Company’s experiments end up working so that the company incorporates the new technique or equipment into its operation.

One at a Time

Both Cachat and Cullen emphasized the importance of altering only one variable per experiment.

“Don’t increase your CO2 and your nutrients and your light spectrum, because you’re never going to know what was what,” Cachat said. “It’s very important for you to understand what happens when you change one variable at a time.

“But you have to know that you’re going to try new genetics and new technologies that are coming out and that are worth putting the time in to explore.”

Sticking to one variable can take patience. One experiment can take two months, and Cullen, a former high school biology teacher, likes to run each experiment twice.

He’s caught his staff changing nutrients in the experimental room while at the same time testing different lights.

“You just can’t do that,” Cullen said. “You need to have one variable that you’re testing.”

Cachat recommended that business owners anticipate a decrease in yield when trying out new lights or other experiments, so separating the experimental space from the main grow operation is important.

“As a grower, your primary concern is to consistently produce the same amount of cannabis over and over again so your revenue is pretty steady,” he said. “By setting aside that R&D space, you don’t have to justify to the financial guys or the investors, ‘I’m cutting production here to try and experiment.’”

Cullen hasn’t ever lost the entire crop in the experimental space, but he’s been forced to deal with issues from experimenting.

He’s tried LED lighting that didn’t produce optimal results, for example. In the case of poorer quality flower, he’ll flash freeze it and send it to extraction for use as hash oil.

“So, we never really have a total loss,” Cullen said. “But we do suffer lower yields because of those experiments.”

In the end, the experiments that result in a boost to production, such as the Gavita light test, make it worth it and add to the bottom line.

“That made up for several experiments that did not produce,” Cullen said. “If we came to the table with the mindset that what we do is the absolutely best way to do it and there’s no room for improvement, I think you become stagnant. Improvement and streamlining that process is what gives you a competitive advantage.”