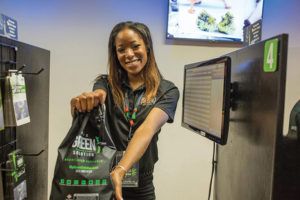 Checklist for taking on the illicit market

The illicit marijuana market is a formidable adversary unburdened by regulations, taxes, employee expenses, childproof packaging and other costs. But that doesn’t mean your business can’t compete with illicit-market competitors.

True, beating them on price might be nearly impossible, but there are other ways for legal businesses to entice customers and provide value that illicit operators can’t offer. These range from safe merchandise and advertising deals to a wide selection of products.

Many cannabis executives believe that by leveraging these advantages, it is possible to outcompete illicit operators—not to mention state-regulated peers.

“This is such a new, high-growth market that you have an opportunity to prove yourself to all segmentations of consumers. Whether it’s selection, quality testing, the method (of consumption), there’s so many different reasons that customers can connect with,” said Chris Melillo, vice president of retail operations for Curaleaf, a multistate operator based in Massachusetts.

Many longtime cannabis consumers prefer their illicit connections over licensed dispensaries, so converting them to the legal market can be challenging.

However, a growing number of consumers are interested in trying cannabis and would seldom obtain it illegally. In fact, new marijuana consumers and former users returning to the plant are among the fastest-growing segments of the cannabis market.

Studies published in 2019 by Seattle data firm Headset and California delivery company Eaze show that Gen Xers, baby boomers and women are the industry’s fastest-growing consumer segments—and most purchase from state-regulated operators. That means legal businesses should pay close attention to converting the canna-curious into active consumers—while making sure not to ignore their loyal customers, of course.

The fact that cannabis has been declared “essential” in many states during the COVID-19 pandemic should make that conversion easier.

“Make sure you’re hitting market share that the illicit market can’t,” said Zachary Pitts, CEO of Ganja Goddess, which operates a statewide delivery service in California and a recreational store in Seattle.

More than 70% of Ganja Goddess’ customers are older than 35, Pitts said, and about half are women.

Providing good customer service and educating shoppers about cannabis in a way that makes them feel comfortable appeals both to newbies and veteran marijuana users who might not have tried a wide array of products, such as edibles, concentrates, tinctures and topicals.

“That’s a competitive advantage that you have over illicit operators. They’re not going to have the setup for customer service and educating their customers, reaching out to those demographics,” Pitts said.

The Green Solution (TGS), a retail chain in Colorado, offers customers “concierge level” service where they get one-on-one attention from budtenders.

“One of our big things is education,” said Steve Lopez, CEO of The Green Solution (TGS). “When people come into our stores, they get one-on-one attention. And during that point, we explain to them our processes. They understand they’re buying the safest product in the market.”

“Onboarding” new patients is something that Curaleaf spends time on as well. New patients receive consultations about what products might best meet their needs and are also told how the company’s products are made and tested.

“You really give them a comfort and become the experts on cannabis for anybody looking to either step into cannabis, or anybody that’s already there and has evolving questions as their conditions may change,” Melillo said.

“I think face-to-face you build both confidence and your reputation. And having those conversations is supported by the labeling and the transparency that we provide.”

Another appeal that legal businesses can leverage over illegal operators is the variety of products available.

If a customer finds something he or she really likes—a certain strain that helped them with a specific condition, for example—that person can feel confident the item will be available on the next visit. Or, at the very least, that consumer can request it. In the underground market, customers have a more limited selection that has little consistency, and special requests are harder to fulfill.

“It’s a stability of the source,” explained Debby Goldsberry, CEO of Magnolia Wellness in Oakland, California.

Legal operators can also use point-of-sale tracking systems to follow what individual customers like and then give them personalized product recommendations.

“We can discuss what worked and what didn’t work … so that when you come in, we’ve developed this feedback loop about what you like and don’t like and we know what to recommend,” Goldsberry said.

Lopez at TGS agreed. “You want to take a scientific approach to consumer research. We are constantly doing surveys and getting feedback and then giving that feedback to store (general managers) in weekly calls. We see consumer reviews that come in every day from the previous day. That gives me a lot of insight,” Lopez said.

Goldsberry added: “The ability to do consumer education and product education and the stability of the supply. That is a big bonus of the regulated market, and that’s something illicit market folks can’t provide
as much.”

Another advantage that legal operators have is the proven safety of their products through lab testing and other compliance measures. This is especially noteworthy in the wake of last year’s vaping crisis, in which an additive found primarily in illicit THC vape cartridges, vitamin E acetate, was blamed for scores of deaths and illnesses.

“I think particularly on the vape product side we could be doing a better job of letting people know why they should be purchasing from the legal market,” said Andrew Kline, director of public policy at the National Cannabis Industry Association.

Melillo from Curaleaf agreed. “What’s really important is the ability for Curaleaf to carve out its reputation on quality and safety, which has probably been the main focus that combats against the illegal market. It’s one of the things that you hear most from our customers, that you understand what you’re getting. It’s labeled, it’s safe, it’s regulated—and that’s where we can really differentiate,” he said.

While it might be easier to make a safety pitch for legal vapes, some executives perceive illicit-market consumers to be less concerned about lab results.

“The ability to have tested cannabis versus nontested cannabis isn’t a factor (for those buying outside the legal cannabis market). My friends that still access the illicit market do not seem to care about that because they believe anecdotal evidence shows the cannabis stream has been fine for 100 years,” Goldsberry said.

Unlike illicit product manufacturers and dealers, state-licensed companies can hold events and exhibit products in markets with regulated cannabis. Photo by Soliman Productions

Despite all the advertising restrictions they face, legal cannabis businesses are still far freer than illegal businesses to advertise. While it’s true some illicit operators advertise on social media, the dark web and elsewhere, legal businesses still have many more avenues through which to advertise and get their message out to a far broader audience.

He added: “Lean into your ability to engage with customers in every way, in every manner. Social media, email marketing, texting. Events, when they are allowed again.”

That advertising and outreach, Pitts noted, should factor in the demographics of new cannabis consumers and the canna-curious.

“It’s important to speak to them at their level,” he said. “You’re not going to attract women with pictures of women in bikinis. That was a very common type of advertisement a decade ago.”

Another way to leverage the visibility that legal businesses enjoy over their illicit rivals is by being a positive force in the local community. That means building a reputation not just as a marijuana store but as a neighborhood pillar and booster.

“We are still doing community work, advocating for political change, supporting our community, supporting medical marijuana patients, offering ancillary services,” Debby Goldsberry of Magnolia Wellness said. Dispensaries, for example, could support local nonprofit groups and make it possible for their consumers to do so as well. (See “Good Citizenship” in the July 2018 issue of Marijuana Business Magazine.)

Additionally, when consumers buy cannabis at a licensed dispensary, the taxes from those purchases go to state and local funds that are earmarked for projects such as drug education, homeless shelters and social equity programs designed to promote minority participation in the legal marijuana industry.

“If I’m buying from a dispensary, I know that my money is going into a pool … that’s going to be used for good, depending where you shop. This is why we advise consumers to find locally owned shops, shops owned by people of color that are doing local good,” Goldsberry said.

Although beating the illicit market on price alone is nearly impossible, that doesn’t mean you should neglect cost-cutting and pricing strategies.

“In terms of pricing, you just have to remain competitive. You can’t allow too much of a gap between the illicit and legal market, or you’re just going to lose too many customers,” said Pitts of Ganja Goddess.

Lopez said TGS prices its products in “the middle” of the market but also has “tier pricing.”

“We go from our highest-quality, top-of-line stuff—that’s one price point—all the way to the lowest price point, where we cut back a little bit on the packaging as well as marketing on some products,” he noted.

Krane of 4Front Ventures doesn’t think battling the illicit market on price is so fruitless. “The best thing you can do is build economies of scale that allow you to compete,” he said.

One way to exploit economies of scale is through automation. For example, 4Front recently purchased a seven-figure edibles-manufacturing machine from Europe that Krane said can produce an array of hard and soft candies in large volume. The company plans to deploy the hardware in Southern California.

“We’re going to be building in a level of automation in the production of infused products—particularly edibles products—and doing them in a way that is so hyperefficient, with so much automation that we think we’ll be able to get the price point down to a place where it’ll be able to compete with illicit-market pricing, at least on the edibles side of things,” Krane said.

While such an investment can pay off in a large market such as California, Krane warned it wouldn’t be worth the capital outlay in smaller state markets, say those with fewer than 10 million potential cannabis consumers.

Conversely, it might be nearly impossible to compete with the illicit market on flower prices in California, but Krane believes it’s more plausible in markets in the Midwest and East Coast, where illicit cannabis isn’t as cheap as that found in western states—not to mention some western markets such as Washington state, where 4Front has cultivation and manufacturing operations.

“A lot of companies have died in the last year in Washington because their cost of production is more expensive than the wholesale price for flower,” Krane said. “We’ve figured out how to get yields that are well above the industry average, and that’s allowed us to not only stay afloat but really thrive in what’s arguably the most competitive market in the country.”

Another way to leverage economies of scale is by bulk buying, although Krane noted that’s not always possible.

“In some markets like Oregon, where there is so much supply, you can buy bulk cheaper by negotiating long-term, guaranteed contracts,” Krane said, adding that states such as Illinois and Massachusetts don’t have the supply to accommodate bulk purchases.

“They’ll catch up to a degree, but they may never really get to the point where Oregon or Washington are now.”

NEXT: Stumbling Blocks from Illicit to Legit