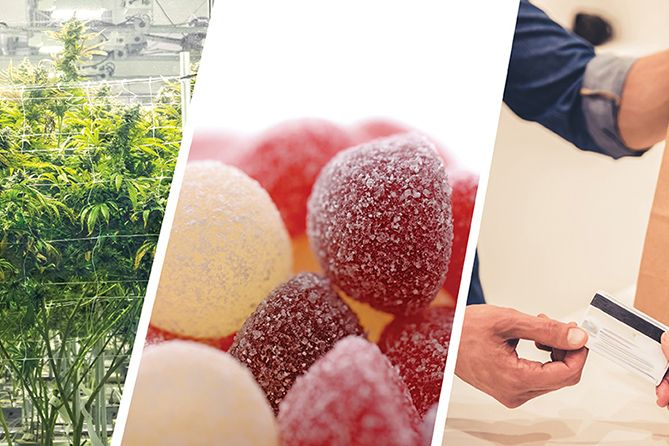 The decision to vertically integrate his new cannabis business is one that has kept Kevin Currier awake at night.

Ahead of Michigan’s transition to an adult-use market, Currier, a resident of the Great Lakes state, applied for a medical marijuana retail license in Grand Rapids.

But he often wonders whether choosing to vertically integrate—defined here as having a cultivation and retail component to a business—would better position his future endeavor for success.

Business owners make the decision to vertically integrate early on, and in some markets, the state chooses for you. In Washington state’s recreational market, vertical integration is prohibited, and in New Mexico’s medical marijuana market, it’s required. Other states, such as Colorado and Oregon, allow vertical integration but don’t mandate it.

State license types and tax laws also play critical roles in the decision to vertically integrate. Consider Oregon, for example: The state has temporarily suspended approvals for new cultivation licenses because of oversupply. But there’s no cap on the number of licenses the state can award. If the state lifts its suspension and begins approving new licenses, it could create an even more tenuous environment for a nonvertically integrated cultivation business that doesn’t control its retail destiny.

“Every state is different, and that creates a different risk-reward for being vertically integrated versus not,” said Troy Dayton, CEO of The Arcview Group in San Francisco.

The ability to leverage economies of scale in a vertically integrated business model is a clear advantage—but experts largely agreed that vertical integration isn’t the model for a business to succeed.

“Because the customer demographic of cannabis is so broad, a diverse number of business models are potentially viable—if decisions are made well,” said Sabrina Fendrick, the director of government affairs for Berkeley Patients Group, a nonvertically integrated retailer based in Berkeley, California.

“I think the question is, does one want to be a jack of all trades or a master of one.”

The Case for Vertical Integration

Vertically integrated businesses can be more responsive to the needs of consumers and rapidly capitalize on trends, said John Downs, director of business development at The Arcview Group.

For example, if a vertically integrated business sees retail sales increase for its Bubba Kush strain, that information can quickly be relayed to the cultivators, who can grow more for the next harvest.

With vertical integration, business owners are also able to leverage economies of scale, he said, meaning they see higher profit margins throughout the supply chain.

And so far, Dayton said, the public markets seem to favor vertically integrated businesses. He’s not convinced that’ll always be the case, but if you’re building a business to be an acquisition target, vertical integration might make your venture more attractive.

In Illinois, for example, there are two license types: one for cultivation, product manufacturing and distribution, and another for retail. The state also limited the number of retail licenses to 55.

“You certainly don’t have to be vertically integrated (in Illinois), but with limited retail licenses in the state, it might not be the worst idea to control the retail destiny for your products, too,” he said.

The Case for Specialization

If you choose to specialize in cultivation, product manufacturing or retail, there’s an opportunity to focus on a single area of expertise and knock it out of the park, Downs said.

“If you do it right, you can create a very successful business for yourself,” Bachtell noted. “There are individual dispensaries—several or a significant number of them—that have north of $15 million or $20 million in annual revenue, and they’re not all owned by multistate operators or people with multiple dispensaries in one market.”

It isn’t just a retail-only model that has the potential to be successful.

Creating branded edibles or concentrates and working with contract manufacturers can help you build a multistate brand without vertically integrating, Dayton said.

If you’re a concentrates or infused product manufacturer that has contract manufacturing agreements with other brands, it makes your investment in that one part of the supply chain less risky, Dayton said.

If you choose not to vertically integrate, processing or extraction can actualize a high return on investment, too, said Anne van Leynseele, the founder and managing partner of 7 Point Law, a cannabis legal firm with offices in California, Maryland, Oregon and Washington state.

“How does an entrepreneur that wants to own a small marijuana business realize their American dream?” van Leynseele asked. “Their highest opportunity for success, in my opinion, is to process.”

Be Alert to Disruptors

If you choose to create a business that focuses on only one part of the supply chain—cultivation, for example—consider factors that could disrupt or harm your new endeavor.

Cultivation and retail are more susceptible to disruption than extraction or distribution, Bachtell said. Distribution and processing, on the other hand, aren’t as sensitive to disruptors.

For example, in the United States, interstate commerce or the ability to import cannabis from other countries could lead to the commoditization of marijuana, he noted.

“In a totally free market where cannabis is legal and there’s interstate commerce and international trade, cannabis is going to be grown in equatorial regions, mostly outdoors, where labor costs are low,” Dayton said. “Certainly, Canada won’t be the biggest exporter.”

A brick-and-mortar retail shop could be disrupted by the state allowing direct-to-consumer delivery or the city or state issuing more retail licenses.

“There’s always the possibility more licenses are issued, and that could disrupt your business model if you’re retail-focused,” Bachtell said. “It could dilute your presence in the market.” He also noted that if big-box retailers ever get the green light to carry cannabis—as Shoppers Drug Mart in Canada did—that could upend your marijuana retail business.

Only 24% of consumers say it’s important for retailers to grow their own marijuana, reports BDS Analytics, a Boulder, Colorado-based cannabis technology company.

Many more consumers want a shop that is trustworthy, with a professional staff and in a good location. They also care deeply about product selection.

On the one hand, it shows that vertical integration is not a purchase driver for consumers. Theoretically, a nonvertically integrated retail shop could build its business around its convenient location, reliable inventory of good products and knowledgeable staff.

On the other hand, the research shows that consumers prioritize consistent access to high-quality flower and edibles—something that may be more easily accomplished if a business is vertically integrated and has control over its supply chain. If a nonvertically integrated retail business curates its menu, it’s at the mercy of cultivators and product manufacturers, and it will pay a higher cost for wholesale products.

Also, if consumers say location is important, retail-only company owners must prioritize where they do business, which can be complicated by a city’s zoning rules and made more difficult if those firms are operating with limited capital.

In the End, Do What You Love

Upfront capital costs, state and local regulations and consumer trends are all important to consider when deciding whether to vertically integrate—but it’s equally important to do what you enjoy.

Why cultivate if you have no interest in agriculture? What’s the point in creating infused food or beverages if you don’t want to be a product manufacturer?

Whether it’s done through vertical integration or specialization, it’s important to do something you love, Dayton said.

“One thing people often don’t think about is what they want to do,” Dayton said. “Part of what makes business interesting is doing what you want to do. Somebody who’s starting a business should ask themselves, ‘Do I want to do it all?’ Because there are going to be winners in every sector. Usually the